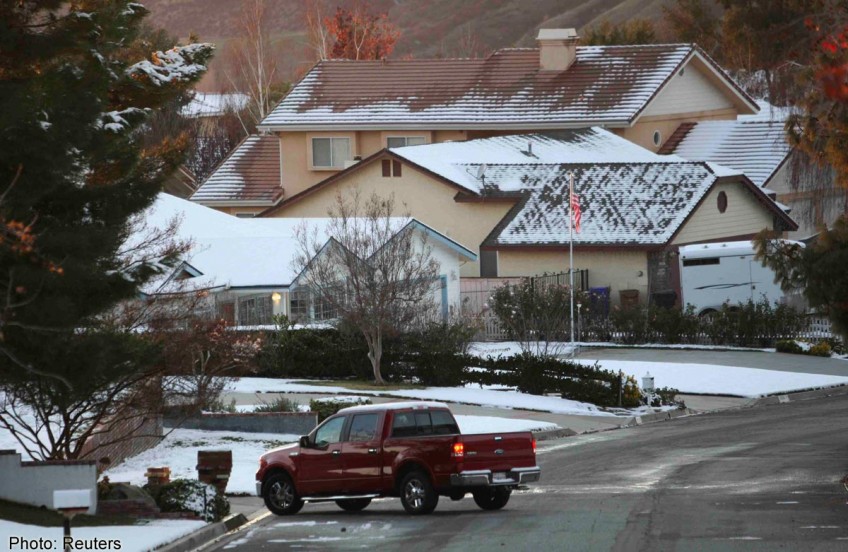 Snow covers a subdivision neighborhood after a storm brought snow to many southern California locales, in Yucaipa, California, December 31, 2014.

Two people died on a wind-thrashed California island, and scores of motorists were left stranded on snow-swept mountain roads farther inland as winter storms chilled much of the Western United States on New Year's Eve, officials said on Wednesday.

High winds also toppled a tree onto a home overnight in the Northern California town of Redding, killing a woman and injuring a child, a fire official said.

A snowshoer in Colorado was killed by an avalanche that roared down a mountain peak on Wednesday west of Denver, although his two companions survived, the Clear Creek County Sheriff's office said.

An Arctic air mass plunged much of the nation, from the Cascades to New England, into sub-freezing temperatures, while winter storm warnings were posted across large swaths of Utah, Colorado, Arizona, New Mexico and west Texas.

Extreme weather prompted officials to cancel a New Year's Eve festival in the Texas capital, Austin, and forecasters warned that crowds camping out for the Tournament of Roses Parade should brace for a record freeze in Pasadena, California.

The Southern California island of Santa Catalina was battered by gale-force winds early on Wednesday, stirring 10-foot swells inside Avalon Harbor and ripping boats from their moorings.

A harbour patrolman working to secure loose vessels was killed when he jumped overboard as his boat neared a shoal and he ended up crushed against the rocks. His body was later recovered, along with the remains of a man believed to have died when his boat was torn loose and broke apart overnight, Avalon Fire Captain John Meffert said.

Later on Wednesday, a freak wind funnel struck a concession area outside Pasadena's Rose Bowl stadium during a pregame event, hurling tents and canopies through the air as vendors and bystanders ran for cover. Four people were treated at the scene for minor injuries, fire officials said.

In the San Bernardino Mountains east of Los Angeles, county firefighters overnight rescued 136 motorists trapped on icy roads near the town of Crestline.

A few dozen more vehicles were stuck in snow on a mountain highway east of San Juan Capistrano, but the California Highway Patrol said rescuers accounted for all the drivers by afternoon.

About 50 motorists were trapped in and around the Mount Baldy ski area northeast of Los Angeles. They ended up lodged at a mountain inn or emergency shelter overnight.

Icy roads in west Texas led to nearly 130 traffic accidents in the city of Midland, with almost 200 more wrecks in nearby Odessa. Revelers in many parts of Texas were likely to brave bitter cold as they ushered in 2015, including in San Antonio, where up to 60,000 people were expected for the state's biggest New Year's Eve bash.

Las Vegas, where some 340,000 visitors were expected for New Year's celebrations, was expected to receive a half-inch to an inch of snow, forecasters said.

Temperatures plunged to a record 19 degrees below zero F on Tuesday night in Denver, breaking the minus 11-degree mark set in 1898.