LONDON - The death toll in a fire disaster that destroyed a 24-storey block of flats in London was expected to rise on Thursday, with many people still missing and firefighters facing hazardous conditions as they searched the charred carcass.

Smoke was still wafting out of the shell of the Grenfell Tower on Thursday morning, 30 hours after fire engulfed the building in the early hours of Wednesday and turned it into a huge flaming torch in a matter of minutes.

Authorities have confirmed 12 deaths, but have said that figure would rise. Firefighters rescued 65 people from the building.

Survivors who have lost everything spent the night at emergency shelters, as charities and local support groups were flooded with donations of clothes and bedding from shocked Londoners.

The fire brigade said the inferno was unprecedented in its scale and speed.

The tower, a social housing block built in 1974 in North Kensington, an area of west London, contained 120 flats and was thought to have been home to about 600 people.

Harrowing accounts emerged of people trapped inside as the blaze destroyed everything around them, shouting for help and trying to escape through windows using makeshift ropes made from bedsheets.

By Thursday morning, there was no sign of life in or around the blackened hulk.

Security cordons were in place around the base of the tower, where the ground was littered with charred debris.

Outside the cordons, impromptu tributes had appeared, with photos of missing people, messages of condolences, flowers and candles.

Emergency services said it was too early to say what had caused the disaster. Some residents said no alarm had sounded.

Others said they had warned repeatedly about fire safety in the block. 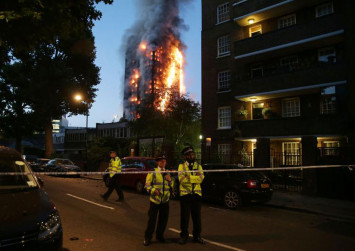 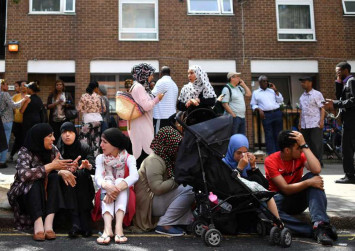