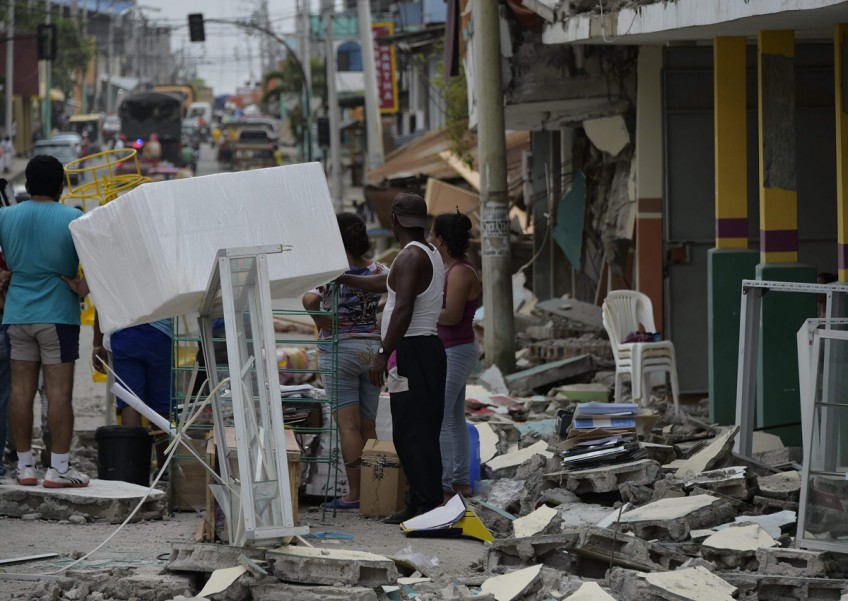 The death toll from Ecuador's biggest earthquake in decades soared to at least 246 as rescuers using tractors and bare hands hunted desperately for survivors in shattered coastal towns.

The 7.8 magnitude quake struck off the Pacific coast on Saturday (April 16) and was felt around the Andean nation of 16 million people, causing panic as far away as the highland capital Quito and collapsing buildings and roads in a swath of western towns.

President Rafael Correa rushed home from a trip to Italy to supervise the emergency and was due to address the nation.

"The immediate priority is to rescue people in the rubble," he said on Twitter. "Everything can be rebuilt but lives cannot be recovered and that's what hurts the most," he told state radio.

The government said 246 people had died and 2,527 were injured in the latest tally early on Sunday evening.

Reuters witnesses said dazed residents sat in destroyed streets, going through rubble looking for loved ones or belongings, and using makeshift coffins for the dead.

Authorities said there were some 163 aftershocks, mainly in the Pedernales area. A state of emergency was declared in six provinces.

The quake has piled pain on the economy of OPEC's smallest member, already reeling from low oil prices, with economic growth this year projected at near-zero.

Tents housing the injured and dead were set up in a blue-and-white sports stadium in Pedernales, where some 60 per cent of houses were destroyed, according to Police Chief General Milton Zarate. About 91 people died there, he said, when the quake brought down parts of the town.

"I was speaking with some friends when it started to shake and then it became strong so we ran," Ms Consuelo Solano, a 40-year-old craftswoman, said as she tried to enter the stadium where clothes and water were being distributed. "We had to sleep in a school. My house collapsed and they robbed me."

Amid the rubble, families prepared to spend the night on mattresses on their patios or in hammered-together shelters in empty lots. Soldiers patrolled the town, where some streets were entirely blocked off due to collapsed houses.

Locals used a small tractor to remove rubble and also searched with their hands for trapped people. Women cried after a corpse was pulled out.

Mr Enner Munoz, 40, a teacher from Pedernales, said he was in his car when he saw wooden houses and lamp posts collapse around him.

"It was devastating. All the roads are cracked open, there were two landslides," he said by phone, adding that bricks had landed in the bed of his home in Pedernales.

His terrified family spent the night on the patio.

In Guayaquil, Ecuador's largest city, rubble lay in the streets and a bridge fell on top of a car. "It was horrible. It was as if it was going to collapse like cardboard," said Mr Galo Valle, 56, who was guarding a building in the city where windows fell out and parts of walls broke. "I prayed and fell to my feet to ask God to protect me."

About 13,500 security force personnel were mobilized to keep order around Ecuador, and US$600 million (S$814 million) in credit from multilateral lenders was immediately activated for the emergency, the government said.

Mr Ramon Solorzano, 46, a car parts merchant in the coastal city of Manta, headed away from built-up areas with his family. Photos from Manta showed Red Cross workers arriving, police hunting through debris, a smashed sculpture, injured people receiving treatment under tents in front of a hospital, and badly damaged buildings.

"Most people are out in the streets with backpacks on, heading for higher ground," Mr Solorzano said, speaking in a trembling voice on a WhatsApp phone call. "The streets are cracked. The power is out and phones are down."

The government called it the worst quake in the country since 1979. In that disaster, 600 people were killed and 20,000 injured, according to the US Geological Survey (USGS).

In international aid, Venezuela, Chile and Mexico were sending personnel and supplies, the left-leaning Correa government said. The Ecuadorean Red Cross mobilised more than 800 volunteers and staff and medical charity Medecins Sans Frontieres said it was sending a team from Colombia.

Canadian Prime Minister Justin Trudeau said on Twitter that two Canadians were among the dead and that the "scope of the devastation in Ecuador is shocking."

The US State Department said in an email that it was working to confirm reports of Americans injured in the quake, although it had no reports of any US citizens killed.

US Secretary of State John Kerry tweeted his nation's solidarity and offered assistance.

The government said oil production was not affected but closed its main refinery of Esmeraldas, located near the epicentre, as a precaution although it is likely to restart soon.

Residents on the Galapagos islands far off Ecuador's coast, home to numerous rare species, said they had not been affected by the quake.

The Ecuadorean quake followed two large and deadly quakes that struck Japan since Thursday. Both countries are located on the seismically active "Ring of Fire" that circles the Pacific, but according to the USGS, large quakes separated by such distances would probably not be related.