As Delta variant keeps Asia on edge, could Israel and Britain offer lessons?

Diners at a restaurant in London, England.

From Australia to Hong Kong, the highly transmissible Delta coronavirus variant is exposing the vulnerability of zero-Covid economies with low vaccination rates.

While many Asia-Pacific economies have controlled the pandemic with strict border controls, the rapid spread of the variant has provided a stark reminder that temporary restrictions are no substitute to mass immunisation.

At the same time, the experiences of highly-vaccinated countries such as Britain and Israel , where deaths from the variant remain low despite surging cases, offer hope of an exit for low-Covid bubbles counting the costs of their self-imposed isolation as much of the world looks towards post-pandemic normality.

Australia, which has been widely held up as a pandemic success story, has in recent days placed more than 10 million people in lockdown as the Covid-19 strain first identified in India fuels outbreaks from coast to coast.

“Until we have a high rate of vaccination, we are in an unstable and vulnerable position, and we have to not lose sight of this,” said Hassan Vally, an epidemiologist at La Trobe University in Melbourne. “The Delta variant and the increased threat it poses has highlighted this fact.”

The Delta variant, which is circulating in at least 85 countries, is believed to be 60 per cent more transmissible than the Alpha variant first identified in Britain, which in turn is about 50 per cent more infectious than the original Covid-19 strain recorded in Wuhan.

On Tuesday, Brisbane began a three-day lockdown after an unvaccinated hospital worker tested positive for the virus, following similar orders in recent days in Sydney, Perth and Darwin.

“We need to go hard and we need to go fast,” said Annastacia Palaszczuk, the Premier of Queensland state of which Brisbane is the capital city.

In New South Wales state, Deputy Premier John Barilaro this week said authorities had “lost control” of an outbreak in Greater Sydney that began with a limousine driver who tested positive for the Delta variant earlier this month after transporting international flight crew.

New South Wales authorities on Tuesday reported 19 new local infections, bringing the total number of cases reported in the state since June 16 to 149.

Less than 5 per cent of Australia’s population has been fully inoculated since the country began its vaccination drive in February, making it one of the lowest rates in the developed world.

Amid mounting criticism of the vaccine roll-out, Prime Minister Scott Morrison this week announced that vaccinations would be made mandatory for aged care and quarantine hotel workers, and that the AstraZeneca vaccine, which had been recommended for older people, would be offered to people under 60 who agreed to waive indemnity.

Although credited with averting mass disease and death, border closures across the Asia-Pacific have inflicted a heavy economic and social toll.

In Hong Kong, GDP fell for a record six consecutive quarters in 2019 and 2020 – a period that overlapped with mass protests – before rebounding this year.

On Tuesday, emerging Asian stocks and currencies closed at their lowest levels in months as the introduction of new curbs in response to the Delta variant dampened expectations of a swift pandemic rebound.

Peter Collignon, an infectious disease expert at the Australian National University Medical School, said he expected the spread of Delta to boost vaccine uptake in Australia, where about one-third of over-70s have yet to receive a single shot.

“That’s the only advantage of these lockdowns – that it does actually shake people out of complacency and they do then increase their vaccine levels,” Collignon said.

In Hong Kong, where less than 20 per cent of the population has been fully vaccinated – including less than 5 per cent of those aged over 70 – authorities on Monday banned flights from Britain, where the Delta variant now accounts for 99 per cent of current coronavirus cases.

The move came on the heels of health authorities confirming the first case of the variant in the city, after a 27-year-old man with no recent travel history last week tested positive.

New Zealand, which has fully vaccinated less than 10 per cent of its population, last week suspended its travel bubble with Australia, before restoring quarantine-free travel for states and territories not affected by the latest outbreaks. Authorities also raised the alert level in the capital Wellington after an Australian tourist tested positive for the virus after earlier visiting the city.

Prime Minister Jacinda Ardern on Monday said the government was considering introducing mask mandates and compulsory scanning of QR codes during periods of heightened alert to lower the risk of the virus spreading.

Dr Michael Baker, a professor of public health at the University of Otago in Wellington, said that while the elimination approach of countries such as New Zealand had produced better economic and health outcomes, authorities could not take vaccinations for granted.

“It is important to vaccinate the populations of all countries as rapidly as possible, as high vaccine coverage will provide protection against Covid-19 transmission and outbreaks, particularly if combined with public health measures,” Baker said.

Although highly infectious and more resistant to vaccines than other strains, the Delta’s trajectory in countries with high inoculation rates suggests it is mostly a risk to those who are unvaccinated.

The Pfizer vaccine is 96 per cent effective against hospitalisation from the strain after the second dose, while the AstraZeneca jab provides 92 per cent effectiveness, according to a Public Health England analysis released in June. Efficacy dropped to 94 per cent and 71 per cent, respectively, with just one dose of the vaccines.

In Britain, where more than 80 per cent of the population has received a single dose of vaccine, coronavirus-related deaths have remained mostly flat despite a 10-fold increase in cases since late May that has delayed the country’s full reopening until July 19.

Although experts have cautioned that hospitalisation and deaths typically lag cases by several weeks, fears of a major spike in deaths have not materialised, with authorities on Monday reporting just three deaths.

Peter Horby, the head of the government’s New and Emerging Respiratory Virus Threats Advisory Group, told BBC Radio over the weekend that the vaccines had made the link between cases and deaths “much weaker”, although it had not been completely broken.

Sajid Javid, the recently appointed British health secretary, on Monday indicated “freedom day” would go ahead as planned next month, insisting Britain must “learn to live with” the virus.

In Israel, where cases have risen more than 10-fold in the last fortnight despite 59 per cent of the population being fully vaccinated, health authorities have reported one or fewer deaths each day for the last week.

Apart from reintroducing a mandate on mask-wearing indoors and strengthening quarantine enforcement, Prime Minister Naftali Bennett has dismissed the idea of new restrictions, pledging “vaccines instead of lockdowns”.

Read Also
What is the 'Delta Plus' variant and where has it been found? 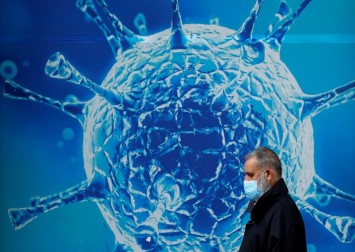 Vally, the epidemiologist at La Trobe University, said the variant’s rapid spread was a reminder Australia remained a “long way from being able to relax”.

“We have a lot of work to do to get vaccines into people to bring the level of immunity up to a level at which it significantly attenuates the population level risk of Covid-19,” he said.

Collignon, the ANU professor, said he expected Australia to be able to stop cycling in and out of lockdowns toward the latter half of the year when millions of doses of the Pfizer and Moderna vaccines are due to arrive.

“In my view, we only need to do it for another four or five months, and then we’ll be in the position where we have lots of people immunised and we can take quite a different approach,” he said.

“Zero Covid, then, is not the approach to take, it’s keeping it down to lower levels but you have to be more tolerant of small outbreaks until you get control of them.”