Demands to alter Obamacare persist even as launch nears 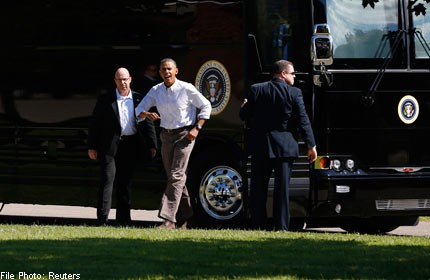 US President Barack Obama steps off his bus upon his arrival at Tully Central High School in Tully, New York August 23, 2013.

NEW YORK - As the clock ticks down to the launch of President Barack Obama's healthcare reform, hundreds of businesses, unions and advocacy groups are still pushing to win concessions on the far-reaching law.

Restaurants want to increase the number of hours that define a full-time worker.

Unionized electrical workers are seeking to change the treatment of health plans offered by multiple employers. Medical device companies hope to end a tax against them even though they are already paying that tax.

Lobbyists face slim odds of getting any additional changes to the law before October 1, when millions of Americans will be able to sign up for subsidized health insurance through online exchanges in each state.

But there is an urgency to push for changes now, legislative experts say, because it will become much harder to do so once the law takes full effect in January. Lobbying may also give these groups leverage in negotiations down the road.

"You can continue advocating for a change, and then you can trade those chips later on for something else," said Dan Mendelson, a former Clinton Administration health official who is chief executive of advisory company Avalere Health.

"The fact that everybody knows they're unlikely to get anything will not stop advocacy."

A Reuters review of lobbying records found that more than 500 companies, business groups, consumer advocates, unions and other organisations weighed in on the Affordable Care Act during the second quarter of this year.

A typical issue in Washington attracts 15 interest groups at any one time, according to research by Beth Leech, a Rutgers University political science professor who has written three books about lobbying.

At the height of political debate over the law, just before Congress passed the legislation in March 2010, more than 1,000 stakeholders lobbied on the bill.

"The Affordable Care Act, from beginning to end, has had an extraordinary amount of lobbying," said Leech.

"All these rules are being made for the first time, so there's a great urgency to have that first rule be a rule you like."

The National Health Council, which represents patients diagnosed with chronic diseases, is fighting a government decision to delay until 2015 a limit on out-of-pocket costs for some consumers.

According to the February ruling, Americans who end up being covered by two different companies for medical and pharmacy costs will have to meet maximum spending limits for both, potentially doubling their costs.

To push the issue, the health council drafted a letter signed by more than 100 patient groups objecting to the government's plan. Advocates then argued their case on a July conference call with representatives from three federal agencies - Labor, Treasury, and Health and Human Services. The government responded by saying the policy would stand.

"We understand that implementation of something this new, this big is going to be difficult," said Marc Boutin, NHC executive vice president, who wants to alleviate the out-of-pocket burden by January 1. "But we should not be creating additional barriers to access."

CHANGES IN THE SERVICE OF SMOOTHER ENROLLMENT

Others hope the Obama administration will show greater flexibility toward last-minute changes that would help the government sign up millions of uninsured Americans in the law's first year.

"We're in a homestretch just to get to October 1 at this point," said Krista Drobac, a policy adviser with law firm DLA Piper's healthcare policy and regulatory group.

"The changes that you're going to see between now and then increase the chances of a smooth open-enrollment period."

She cited an agreement announced late last month between the US government and eHealth Inc allowing the online insurance broker to enroll individuals eligible for tax subsidies in more than 30 states.

Some may have a tougher hill to climb. After more than three years of trying to solicit changes through the administration, the National Restaurant Association has turned to Congress to alter the law's definition of a full-time worker to one who works 40 hours a week, up from 30.

Starting in 2015, employers with more than 50 full-time staff are required to provide health coverage or face a penalty.

Waiters, kitchen staff and other restaurant employees work variable shifts that are difficult to track, while many restaurants are already monitoring the 40-hour threshold that triggers overtime payments, said Michelle Neblett, the NRA's director of labour and workforce policy.

The 30-hour threshold would hurt the ability of employees to work flexible hours, she said, as managers will grow skittish about costs. Groups may win success by finding ways to avoid the healthcare law's political quagmire altogether.

For instance, the medical device and health insurance industries may seek relief from new taxes imposed by Obamacare by lobbying on tax-reform proposals, arguing that the levies they face have been decoupled from Obamacare.

Joan Alker, executive director of the Center for Children and Families at the Georgetown University Health Policy Institute, said her centre has written more than 100 pages of comments this year to influence new regulations.

She recognises that the administration has likely closed the door on tweaking rules.

"States really have to turn their attention to getting this up and running," Alker said.