A monster, a bucket and a fish finger ran for office as official political candidates.

No, that's not the beginning of a joke. It actually happened in the most recent British election that plunged the entire UK into its current political quagmire.

The great thing about a democracy is that anyone and everyone can take part, and the Brits are serious about upholding that long-standing tradition.

Whacky fringe candidates have been a quirky feature of their elections for decades, and the most powerful woman in the UK saw herself sharing a platform with a motley assortment of political rivals.

I love Britain man 😂 Lord Buckethead and Elmo standing up against Theresa May #GE2017 pic.twitter.com/p0Y884jaxE

Without further ado, here are some of the more eyebrow raising choices UK citizens have in their ballot boxes this year.

Reminiscent of Star War's Darth Vadar, the caped crusader cuts a mysterious figure all decked out in black, but the most prominent detail about him, is the giant bucket worn atop his head.

Aptly named, the character inches closer to prime minister Theresa May, eventually scoring a picture with her and a paltry 249 votes - a commendable feat considering nobody even knows his identity.

Describing himself as an "intergalactic space lord", this is the third time the same character (or a person dressed as him) has campaigned to be a member of parliament.

The same name was first used in an attempt to unseat Margaret Thatcher in 1987, and a second time in 1992 against John Major.

Whoever Buckethead is, I'll commend him for the effort he puts in, as you'll be able to find a whole political manifesto listed on his webpage.

For real though, his name is Bobby Smith, a 33-year-old father's rights activist who is hoping to reform the family courts with his one-man "Give Me Back Elmo" party.

"I hope to build a record, even if I don't get any power," he was quoted in the Courier Mail as saying in an interview two years ago.

"No parent who is fit and willing should ever be denied their right to share equally in the lives of their own children."

I’ll never not love about the fact Britain makes its most powerful politician run against Elmo and a man with a bucket on his head pic.twitter.com/eVfiHhkacF

Unfortunately for Smith, his performance deteriorated and this election saw him receiving a measly three votes, down from the 37 he got last time around.

Careful what you wish for, especially with dubious internet polls.

Mr Fish Finger is the legitimate alias of a man who changed his name by deed poll after asking his Twitter followers if they would rather be led by Liberal Democrats leader, Tim Farron, or a fish finger.

Not that hard of a choice for them, so he legally changed his name, bought the costume, and announced he was running.

Although Farron won with a majority of 777 votes, the frozen seafood snack managed to both steal his limelight and garner a respectable 309 votes.

In existence since the 1960s, the Monster Raving Loony Party was established by musician David Sutch who went by the name "Screaming Lord Sutch".

Their party tagline being "vote for insanity", the current leader of the 'Loonies' is Howling Laud Hope who ran against PM May and amazingly enough, received 119 votes.

Indeed we do! #GE2017 pic.twitter.com/KlUEridbBZ

Another party member is Knigel Knapp, who ran against Labour leader Jeremy Corbyn in East London.

You know you're watching a British election when you see the Monster Raving Looney Party on your TV pic.twitter.com/csyFVlJnGs

If you're intrigued enough to check out their 2017 'manifesto', the party said that they would "stand on a platform of free woollen hats for all, so we can pull the wool over peoples eyes".

At least it's a step up from the one in 2016 which talks of feeding mythical creatures and legalising broccoli.

With over 3,000 hopefuls, dressing up as caricatures would improves one's chances of standing out from the crowd.

It would, at least, make for an interesting watch of an otherwise dry event.

Maybe our local opposition and independent candidates could take a leaf out of their very bizarre books?

Read Also
Britain's May apologises to own MPs for election 'mess' 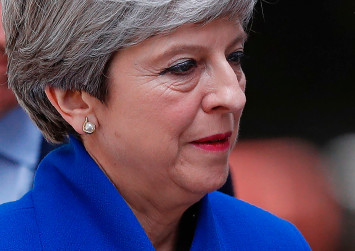