SEOUL - Flamboyant former NBA star Dennis Rodman was headed for North Korea Tuesday, with the heavily-tattooed former player apparently set for another round of his controversial "basketball diplomacy".

Sporting a baseball cap, sunglasses, multiple facial piercings and a black t-shirt emblazoned with the logo of sponsor PotCoin - a cryptocurrency for the legal cannabis industry - Rodman posted a photo of himself on Twitter smiling and waving his ticket on the North's flag carrier Air Koryo.

"Headed back to North Korea," Rodman tweeted, thanking PotCoin for sponsoring his mission.

The flight carrying the 56-year-old left Beijing International Airport at 1 pm (0500 GMT) for Pyongyang, after the eccentric ex-Chicago Bulls power forward had caused a stir with a crowd of journalists pursuing him through the departures hall.

Rodman has made at least four visits to Pyongyang, most recently in 2014 when he attracted a deluge of criticism after being filmed singing happy birthday to his "friend for life", leader Kim Jong-Un.

The trip comes amid high tensions between Washington and Pyongyang - which is currently detaining four Americans - following a series of missile tests by the North. 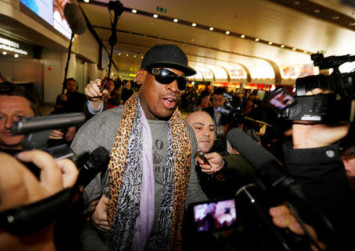 These have prompted successive rounds of sanctions and caused the US to step up its own muscle-flexing in the region.

A senior Trump administration official told Fox News Rodman was going to the North "as a private citizen".

The player nicknamed "The Worm" is one of the few Westerners to have met Kim, who took over following the death of his father Kim Jong-Il in 2011.

It is not clear whether Rodman, who once dated Madonna and was married to model and actress Carmen Electra, will be meeting Kim Jong-Un during the trip or what its exact purpose is.

Rodman has met Kim on some but not all of his previous trips.

He has previously described his visits - including one in 2013 with the Harlem Globetrotters - as "basketball diplomacy" but has been roundly criticised for failing to raise human rights issues or the plight of US missionary Kenneth Bae, who was detained at the time.

Rodman, who is known as much for his piercings, ever-changing hair colours and off-court antics as his court skills, has developed an unlikely relationship with the North Korean leader since making his first trip there in 2013.

The bombastic player - who once wore a wedding dress to promote one of his books - also knows US President Donald Trump, having appeared as a contestant on his reality television show "Celebrity Apprentice".

Trump called Rodman "smart" for his 2013 trip to North Korea, Politico reported at the time.

"It's not an act. But he's a much different guy and this year on the Apprentice - it's amazing how sharp and smart. Dennis is not a stupid guy. He's smart in many ways; he's very street-wise," Trump was quoted as saying.

Analyst Daniel Pinkston, a lecturer at Troy University, said he did not believe that Rodman was going as a back-channel emissary from Trump, despite US media speculation.

"I have high confidence that's not the case but Dennis does know Trump and he does know Kim," Pinkston said, adding that "it's not a pre-planned thing, the White House, State Department calling him, saying 'Take this envelope, say this thing'." The young Kim, who was educated in Switzerland, is reported to be a keen basketball fan and especially of the Chicago Bulls. Rodman played a key role in winning three NBA titles for them alongside Michael Jordan in the 1990s.

Pinkston said the trip was likely part of an effort by the North's foreign ministry to ease tensions with Washington.

The North has occasionally jailed US citizens on charges ranging from hostile acts to illegal entry, and released them only after visits by high-profile figures including former president Bill Clinton.

Rodman routinely distances himself from political events in North Korea.