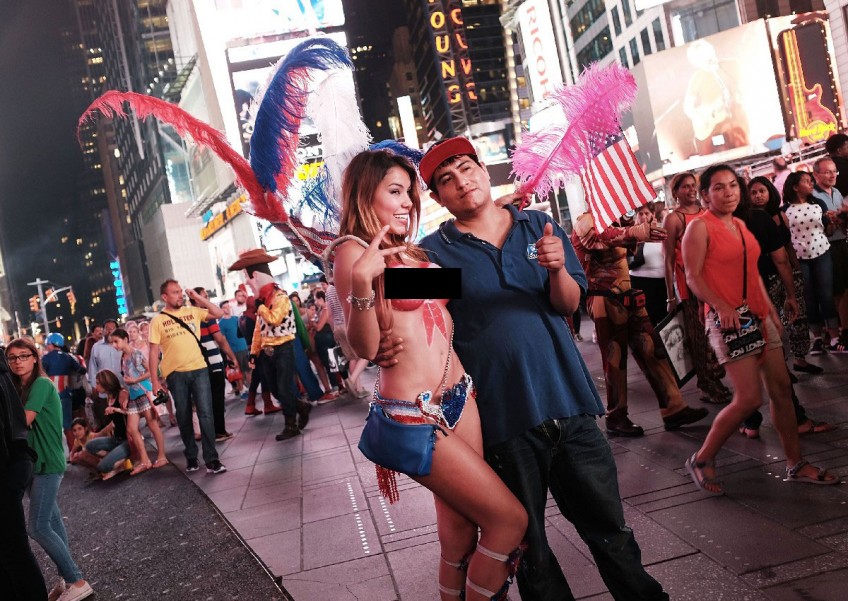 A semi-nude model poses for a photo in Times Square on August 19, 2015 in New York City.
AFP

NEW YORK - New York City would require topless women in body paint, Elmo impersonators and other costumed characters who populate Times Square to work in designated zones under a new plan to manage a surge of street performers in the famed Manhattan crossroads.

Mayor Bill de Blasio voiced qualified support for the proposal, which was released on Thursday by a business group and is a response to the increasing criticism of the performers from officials.

De Blasio and New York Governor Andrew Cuomo have called the performers aggressive solicitors who threaten to drag Times Square back to the "bad old days" when the area was a tawdry magnet for prostitutes, drug dealers and panhandlers.

"Times Square should be a place of freedom of expression, freedom of movement and creativity, without being a free-for-all," said Tim Tompkins, president of area business group Times Square Alliance, which wrote the report.

The performers, including topless women in body paint known as "denudas" and dozens of costumed mascots, have multiplied in recent years, posing for pictures with tourists, often in return for tips.

But alleged incidents of harassment of tourists and violence has led to stepped-up scrutiny from police and demands from some critics for a crackdown. In one case, a man dressed as Spider-Man was accused of punching a police officer after demanding a tip from a tourist last year.

The controversy intensified in recent weeks as the city's tabloids drew increasing attention to the denudas. De Blasio and Cuomo say the topless women will scare away families and reverse a transformation of Times Square in recent years into a tourist mecca.

The precise location for the "designated activity zones"envisioned under the proposal was not immediately clear, nor was their proposed size.

In addition the city would carve out separate "flow zones"for pedestrians and "civic zones" for staging performances and other public events.

Tompkins, a member of de Blasio's Times Square Task Force, unveiled the plan at a meeting on Thursday. The task force, which includes elected officials and area business owners, will present a comprehensive strategy to the mayor by Oct. 1.

After the meeting, De Blasio indicated that he would support the zoning plan outlined on Thursday. "It's a great idea if we can figure how to do it," he told a CBS News affiliate.