Diver attacked by shark off Australia 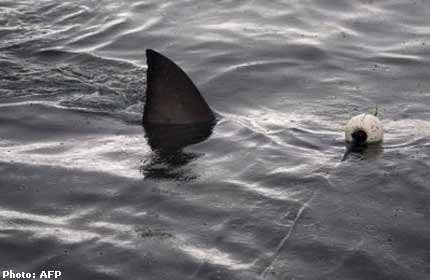 SYDNEY - A commercial diver suffered "substantial" injuries after being attacked by a shark off remote Western Australia, officials said Tuesday, with reports describing it as his second mauling in a decade.

The man, named in media reports as Greg Pickering, 55, was with a diving crew from the Southern Wild Abalone company when the shark struck off Poison Creek beach, east of the town of Esperance.

"Obviously, there has been some substantial injuries (as) with any encounter with a shark, but at this stage (the details are) still quite sketchy," the firm's owner Marcus Tromp told the Australian Broadcasting Corporation.

"I understood that he was still conscious and in good hands as far as first aid goes."

Another diver was in the area and came to assist Pickering's crew with first aid before transporting him to shore for treatment, Tromp said.

The ruggedness and remoteness of the area, in a wilderness park and accessible only by four-wheel drive, complicated his retrieval and transport by ambulance to Esperance, 160 kilometres (100 miles) from the dive site.

The Royal Flying Doctor Service said it had dispatched a plane to collect Pickering from Esperance and take him to Perth for treatment.

According to Fairfax Media it was the experienced diver's second shark encounter in the past decade, having been bitten by a 1.5-metre (5-foot) bronze whaler shark while spear-fishing with a friend in the west coast town of Cervantes in 2004.

Pickering was undergoing emergency surgery in Esperance before the flight to Perth late Tuesday, and the fisheries department ordered that the shark be caught and destroyed.

It is the first shark attack reported in Australia since December 2012, when a paddle-boarder lost a finger and suffered a serious bite to his thigh at Diamond Head north of Sydney.

There has not been a fatality since July 2012 when a surfer was bitten in half off Western Australia, capping an unprecedented spate of five deadly attacks by the marine predators that sparked calls for a cull.

Local marine scientists have described Australia's west coast as the deadliest shark attack zone in the world, and a tagging and tracking programme has been launched in a bid to limit fatalities.

Sharks are common in Australian waters but deadly attacks are rare, with only one of the average 15 incidents a year typically proving fatal.

Experts say attacks are increasing in line with population growth and the popularity of water sports.