Dogs vs cats - which is the smarter pet?

The eternal question between pet loving guys- between cats and dogs, which is the smarter species? Anecdotally it seems the cats seem to win out, with their cool demeanour, compared against the archetypal slobbering dog.

A new study done at Vanderbilt University might shed light on the likely answer, though. It's actually the first study to actually tally the number of cortical neurons in the brains of carnivores including cats and dogs, according to Sciencedaily.com.

So, what's the answer?

Associate Professor of Psychology and Biological Sciences Suzana Herculano-Houzel, developer of the method to accurately measure the number of neurons in brains, describes: "I believe the absolute number of neurons an animal has, especially in the cerebral cortex, determines the richness of their internal mental state and their ability to predict what is about the happen in their environment based on past experience."

The study found that dogs have about 530 million cortical neurons while cats have about 250 million. (Just so you'll feel better, humans have 16 billion.)

Read Also
Your dog may be manipulating you with those puppy eyes, study shows 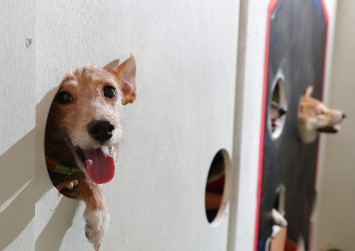 "I'm 100 per cent a dog person," she added, "but, with that disclaimer, our findings mean to me that dogs have the biological capability of doing much more complex and flexible things with their lives than cats can. At the least, we now have some biology that people can factor into their discussions about who's smarter, cats or dogs."

Does the size of the animal matter though? Not neccesarily, with analysis also discovering that raccoons packed the same number of cortical neurons as a dog into a brain the size of a cat's.

So the next time the neighbours' cat looks smugly at you while you're headed out, smirk back - your dog's got the smarter brain.

This article was first published in Men's Health Singapore