Dozens of casualties in army bombing near Damascus: NGO 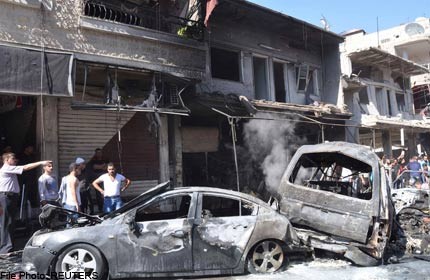 People gather around wreckage after a car bomb exploded in the Jaramana district of southeast Damascus in July.

BEIRUT - Dozens of people were killed or wounded in fierce army bombardment of areas near the Syrian capital on Wednesday, a monitoring group said, while activists charged that toxic gas was deployed.

"Regime forces after midnight stepped up military operations in the East Ghouta and West Ghouta zones of the Damascus region with aircraft and rocket launchers, causing several dozen dead and wounded," said the Syrian Observatory for Human Rights.