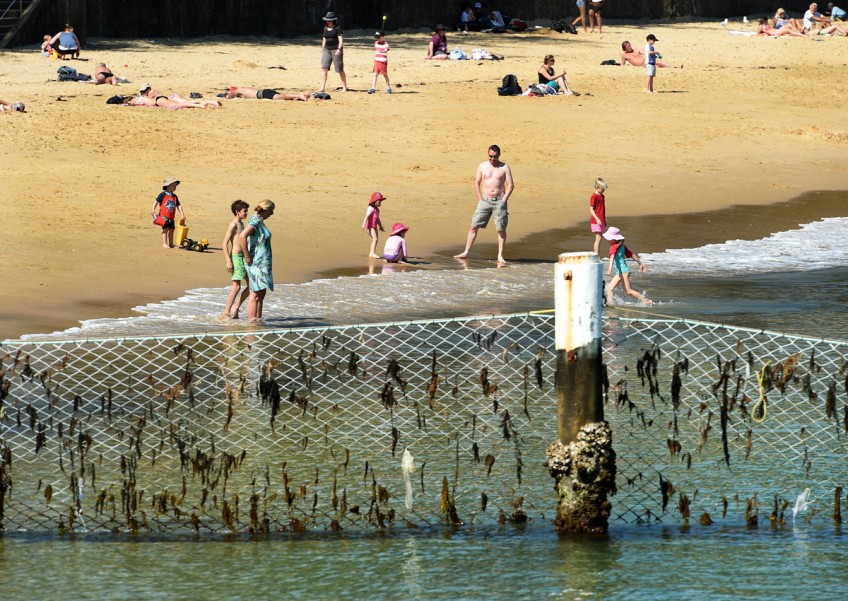 Children play on a beach behind a shark net at Manly Cove.
AFP

Drones will circle popular swimming spots in eastern Australia and “listening stations” track tagged sharks as part of a new strategy announced Sunday to keep beachgoers safe after a spate of bloody attacks.

The country has one of the world's highest incidences of shark attacks with 13 in New South Wales this year leaving one dead and seven injured, threatening the beach tourism industry.

In response the nation's most populous state, which has ruled out culling sharks, unveiled a five-year plan to address the issue, including next-generation sonar systems and boosted aerial surveillance.

"We are proud to be the first jurisdiction anywhere in the world to adopt an integrated approach toward keeping our beaches safe," he said.

The wide-ranging Aus$16 million (US$11.5 million or S$16.1 million) plan to protect swimmers and surfers, while minimising harm to sharks, will see the trial of drones to provide real-time vision, while boosting helicopter surveillance.

The tagging of sharks will be stepped up, sonar detecting buoys deployed and 20 "listening stations" built at known hot spots using 4G technology to allow tagged animals to be monitored.

The real-time information will eventually be available to the public on a SharkSmart mobile app.

A Japanese surfer died in February after his legs were torn off by a shark and there have been 12 other serious attacks up and down the more than 2,000-kilometre-long NSW coast.

There were only three attacks in the state in 2014.

Part of the NSW funding will also be used to continue researching new technologies, including the use of electrical barriers powered by wave energy which omit low frequency pulsed signals to deter sharks.

Under the policy, 72 baited hooks attached to floating drums were to be put in place between November and April each year until 2017 after a spate of attacks, with captured sharks killed if considered a threatening size.

More than 170 sharks, mostly tiger sharks, were caught during a 13-week trial, with 50 of the biggest ones destroyed.

Environmentalists said the policy was flawed, with no clear public safety outcomes but a heavy environmental cost, and it has now been abandoned.