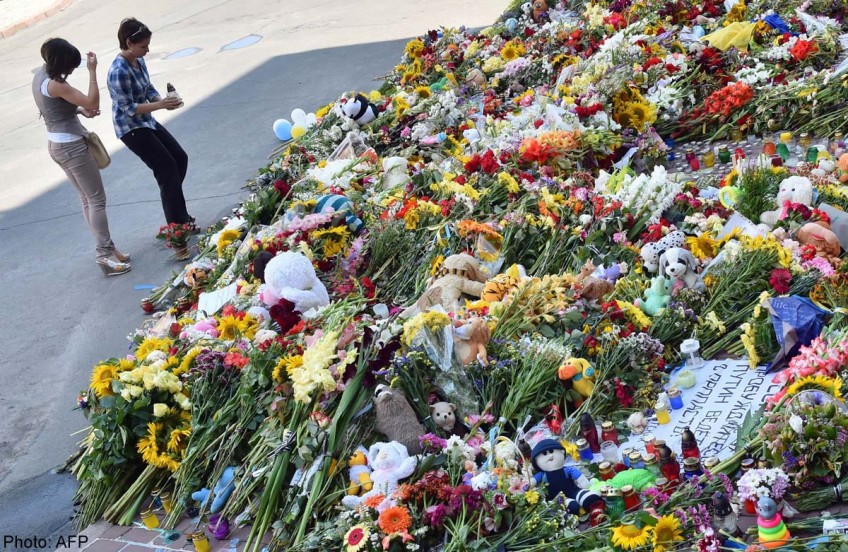 Women set candles during a flowers laying ceremony at the Netherlands embassy in Kiev on July 21, 2014.

THE HAGUE - A bereaved Dutch father has written a savagely ironic open letter to whoever shot down flight MH17, "thanking" them for killing his 17-year-old daughter Elsemiek, "my dear and only child".

"Thank you very much Mr (Russian President Vladimir) Putin, separatist leaders or the Ukrainian government, for murdering my dear and only child," Hans de Borst said in the letter published by Dutch media on Monday.

"Suddenly she's gone. Shot out of the sky in a foreign war-torn country," De Borst said of Thursday's crash, in which 298 people died including 193 Dutch.

The crash has been widely blamed on a missile fired by pro-Kremlin separatists allegedly supplied by Russia, but Moscow blames the Ukraine government.

"Elsemiek was going to finish school next year with her best friends Julia and Marine (who were not on the flight), and she was doing well. She wanted to study civil engineering at Delft University, and she was really excited."

"I hope that you're proud to have destroyed her young life and that you can look at yourself in the mirror," wrote the bereaved father.

"I hope that you will read this message soon, maybe translated into English (which you, as intelligent men, can read)."

Anger is growing in the Netherlands that the dead have yet to be returned from rebel-held eastern Ukraine, with many deploring the chaotic handling of the bodies and the crash site.