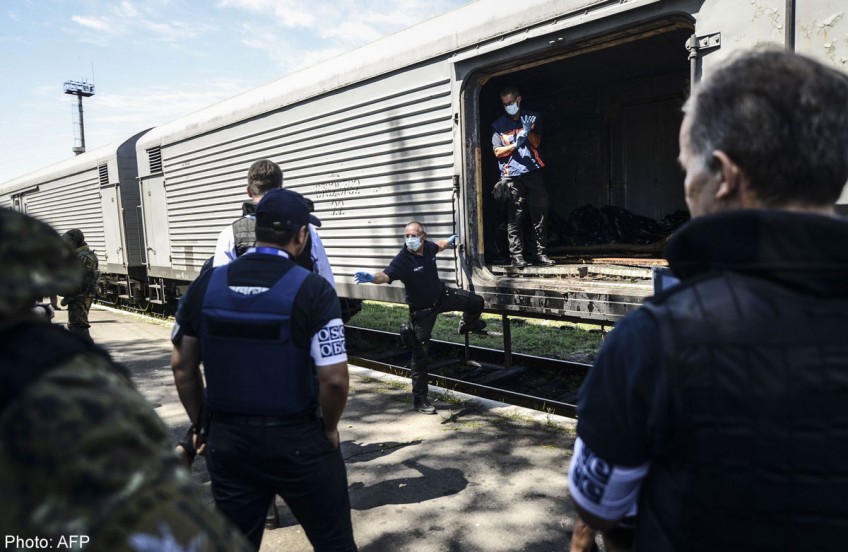 Members of the Ukrainian Emergencies Ministry gather and place bodies at the crash site of Malaysia Airlines Flight MH17.

TOREZ, Ukraine - Dutch investigators on Monday inspected bodies recovered from downed passenger airliner MH17 which had been loaded on to a train under rebel control, an AFP reporter said.

As each of the train wagons carrying a total of more than 200 corpses was opened and examined by two men wearing masks and headlights, an overpowering stench emanated.

"I think the storage of the bodies is (of) good quality," Peter Van Vliet, the forensic expert leading the Dutch team, said after examining the corpses.

The expert, speaking as 50 armed insurgents looked on, said his team would head to the main crash site about 15 kilometres (nine miles) away.

The investigators were accompanied by a team of international monitors from the Organisation for Security and Cooperation in Europe (OSCE) who have been visiting the impact site over the past few days.

In the Netherlands, Prime Minister Mark Rutte said the priority is to move the bodies to Kiev-controlled territory.

"The first aim is to get the trains out and let them go to Ukrainian-controlled territory, preferably Kharkiv," Rutte said, referring to a major city some 300 kilometres (185 miles) away which has remained firmly in Kiev's hands.

"We want our people back."