Duterte apologises to Obama for cursing him 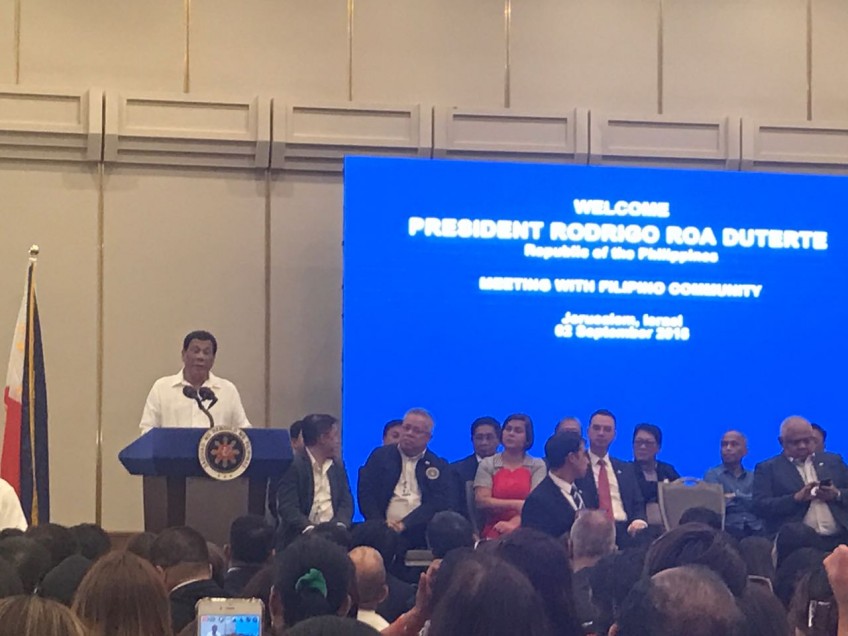 President Rodrigo Duterte on Monday morning apologised to former US President Barack Obama for cursing him and even calling him a "s*n of a b*tch" for criticising his administration's war on drugs.

"It would be appropriate to say at this time, Mr. Obama, you are now a civilian. I am sorry for uttering those words. Know it was just a plain talkatese. We have learned our lessons very well," Duterte said in a speech before thousands of overseas Filipino workers (OFWs) at the Ramada Hotel here.

The statement angered Duterte, prompting him to fire back at Obama with a warning to keep his hands off the country's domestic affairs.

"Being the president of a republic, you ought to know the basic rules. You do not criticise, especially if it is a problem of the country that you are criticising," he told Obama.

But the President suddenly changed his tune and said he had already forgiven Obama.

In the same speech, Duterte hailed US President Donald Trump as a "good friend."

"Trump is a good friend of mine," he said.

Duterte, who has been hostile to Obama has showed warmer relations to Trump since the business magnate became the US President.

Trump last year told Duterte in a phone conversation that the Philippine leader was doing a "great job."

The President left Manila on Sunday for Jerusalem for a four-day historic visit.

He arrived at the Ben Gurion International Airport 1:32 a.m. Monday (Philippines time) together with government officials and retiring military and police generals.

Nathaniel Imperial, Ambassador of the Philippines to the State of Israel, said the visit of Duterte "is extremely important."

"We consider this visit extremely important. We consider it a historic visit and we hope to transform this historic relationship and this enduring friendship into a more vibrant and stronger partnership," Imperial said.

During his visit here, the President will witness the signing of labour, defence, science, trade and investment deals.

The chief executive will also visit the Yad Vashem Holocaust Memorial Center and the Open Doors monument to commemorate the humanitarian assistance provided by the Philippines to Jewish refugees escaping the Holocaust in the late 1930s.

"We expect the President to visit this important site, which symbolizes our strong friendship with the Israeli people. And you know it's an important part and highlight of the visit of the President," Imperial said.

This monument is a manifestation of this enduring friendship and the shared history between the Philippines and Israel," he added.

After his visit here, the President will proceed to Jordan for a three-day official visit.