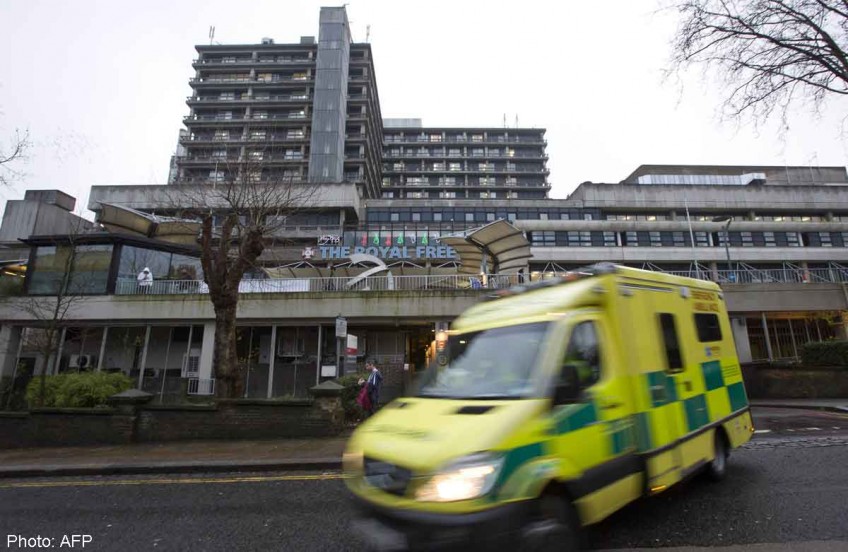 An ambulance pulls away from The Royal Free hospital in north London where it was announced that British nurse Pauline Cafferkey, who contracted Ebola while working in Sierra Leone, is in 'critical condition'.

LONDON - A British nurse who contracted Ebola in Sierra Leone was in a "critical" condition Sunday, locked in isolation inside a specialist London hospital.

Pauline Cafferkey's health has taken a turn for the worse in recent days, the Royal Free Hospital said in a statement.

"The condition of Pauline Cafferkey has gradually deteriorated over the past two days and is now critical," the Royal Free Hospital in London said in a statement.

On Wednesday, doctors had said the 39-year-old Scot was sitting up in bed, reading and talking to staff from inside her isolation tent in the hospital.

They said Cafferkey, who was working with the charity Save the Children in Sierra Leone, had agreed to have blood plasma treatment and take an experimental anti-viral drug.

However, they were not able to give her ZMapp, the drug used to cure fellow British volunteer nurse William Pooley, because global supplies had run out.

The plasma was taken from the blood of a patient successfully treated in Europe, in the hope that the antibodies it contained would help her fight the virus.

Doctor Michael Jacobs, infectious diseases consultant at the Royal Free, warned at the time that "Ebola runs a very variable course and the next few days are going to be very critical.

"Things may get worse," he warned.

Cafferkey, who works for the National Health Service in Scotland, was volunteering at a British-built treatment centre in Kerry Town, not far from Sierra Leone's capital Freetown, when she contracted the deadly virus.

British Prime Minister David Cameron said on Twitter: "My thoughts and prayers are with nurse Pauline Cafferkey who is in a critical condition with Ebola."

"The plasma is probably her best chance of treatment," he said.

Cafferkey is the second person to be treated for Ebola in Britain after Pooley, who recovered and has since returned to Sierra Leone.

She was diagnosed in Glasgow on December 29 after flying home, and was transferred to the Royal Free, which has the only isolation ward in Britain equipped for Ebola patients.

Meanwhile in Swindon, southwest England, a person with a history of travel to west Africa was being tested for Ebola as a precautionary measure after being admitted to hospital.

Around 100 people have been tested for Ebola in hospitals across England during the current outbreak, with all of them testing negative so far apart from Cafferkey.

Ebola has killed 7,890 people in the past year, out of 20,171 cases, according to the latest tally by the World Health Organisation.

Almost all the deaths and cases have been recorded in the three west African countries worst hit by the outbreak: Sierra Leone, Liberia and Guinea.

Ebola can fell its victims within days, causing severe fever and muscle pain, weakness, vomiting and diarrhoea. In severe cases it shuts down organs and causes unstoppable bleeding.

The virus is spread through direct contact with the bodily fluids of an infected person, meaning people caring for the sick are particularly exposed.

As of December 28 - not counting Cafferkey - a total of 678 healthcare workers were known to have contracted the virus, of which 382 had died.

"The efforts of frontline healthcare workers like Pauline have been essential for containing the spread of Ebola, even though it means they themselves face considerable risks," he said.

"Their bravery and their compassion is inspirational."