Eerie silence in Westminster after attack 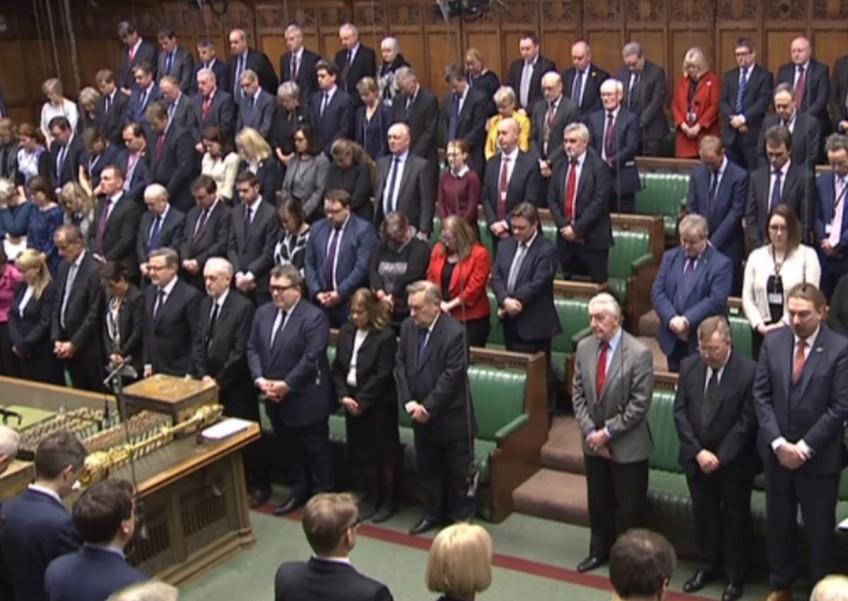 In a still image taken from footage broadcast by the UK Parliamentary Recording Unit (PRU) on March 23, 2017 shows members of parliament standing for a minutes silence in a gesture of defiance a day after an attacker sowed terror in the heart of Westminster.
AFP PHOTO / PRU

LONDON - A bloodied rag lay on the cobbles as two forensic officers worked in a blue tent nearby. But it was the silence Thursday that was the most poignant reminder of the terror attack outside Britain's parliament.

The House of Commons resumed business as planned in a show of defiance - even allowing in members of the public to watch, as usual.

But outside, where normally there is noisy traffic, crowds of tourists and busy-looking MPs and officials walking in and out, the Palace of Westminster - cordoned off since Wednesday afternoon - was eerily quiet.

The only sounds were the helicopters circling above and the fountain in New Palace Yard, still gushing water just short distance from where police officer Keith Palmer was stabbed to death and his suspected assailant was shot.

Parliament was locked down during the attack, in which the suspect first mowed down scores of people on nearby Westminster Bridge, leaving two members of the public dead and dozens injured.

But MPs packed the green benches of the Commons chamber for a minute's silence at 0933 GMT, their heads bowed in tribute to those who died.

"As we begin our questions today, I think it's appropriate we recommit ourselves to the values this parliament represents," said International Trade Secretary Liam Fox.

"Those who carry out such wicked and depraved acts as we saw yesterday can never triumph in our country, and we must ensure it is not violence, hatred or division but decency and tolerance that prevails in our country."

He then answered a question about trade relations with Israel in a show of "business as usual" in the seat of British democracy.

Conservative MP Bob Blackman was visibly emotional as he made a short statement in tribute to the murdered policeman, "who died so that we can carry out our democratic duties".

"What we've got to do is not give in to terrorism today," Lindsay Hoyle, the deputy speaker of the House of Commons, told Sky News television.

"We will pay tribute to what has gone on. What we will do is continue as the House of Commons. We will not give in to terrorism, and terrorism will never ever win." .

A bouquet of flowers lay next to the security cordon outside Westminster Abbey as a tribute to the victims, while a single bloom was tucked into the knot of a police tape.

Flags on government buildings around Westminster flew at half-mast, but many people were walking or cycling into work as usual.

"There's definitely an air of nervousness, you can feel that. It's very obvious to see that something very serious happened here," said Jason Llewelyn, a civil servant.

Teresa Jacobson, an event planner, said: "People are anxious. They don't know what's happening." Parliamentary staff were escorted into the palace through a side entrance, through the House of Lords coatroom.

There were respectful exchanges between staff, while armed police stood silently on guard.

In the cobbled yard, the bloodied rag was the only remnant of the frantic scenes where a minister and emergency services tried in vain to resuscitate Palmer, a 48-year-old husband and father.

A blue forensics tent stood over the spot where the assailant died, shot by a police marksman, with an ambulance parked alongside.

Another tent was installed outside the gates, where the assailant crashed his car.

Jemma Jackson, a paediatric nurse, said: "I think it's right that we continue to carry on.

"I think people probably feel there is an element of fear, but really, we won't let this beat us."