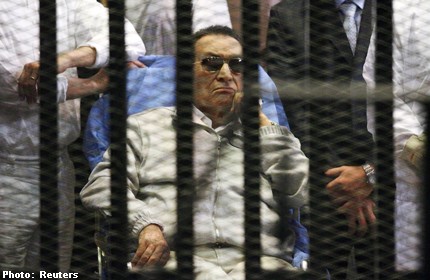 Egypt's ousted President Hosni Mubarak sits inside a dock at the police academy on the outskirts of Cairo.

CAIRO - An Egyptian court on Wednesday ordered the conditional release of former president Hosni Mubarak in the remaining case against him, judicial sources told AFP.

It was not clear if he would be released immediately.

In the past, when courts have approved Mubarak's release, prosecutors have leveled new charges to keep him in detention.

Prosecutors have previously appealed when courts have ordered Mubarak released, but state news agency MENA said the Wednesday decision could not be appealed because it was issued by an appeals court.

The decision came in a hearing on the fourth of the cases the former president currently faces.

On Monday, a court ordered his conditional release in the third of the cases against him, with judicial sources telling AFP his lawyer would seek his release on Wednesday.

There was no news of an immediate order for Mubarak's release, and he still faces trials in the four cases against him, which include allegations of corruption and killing protesters.