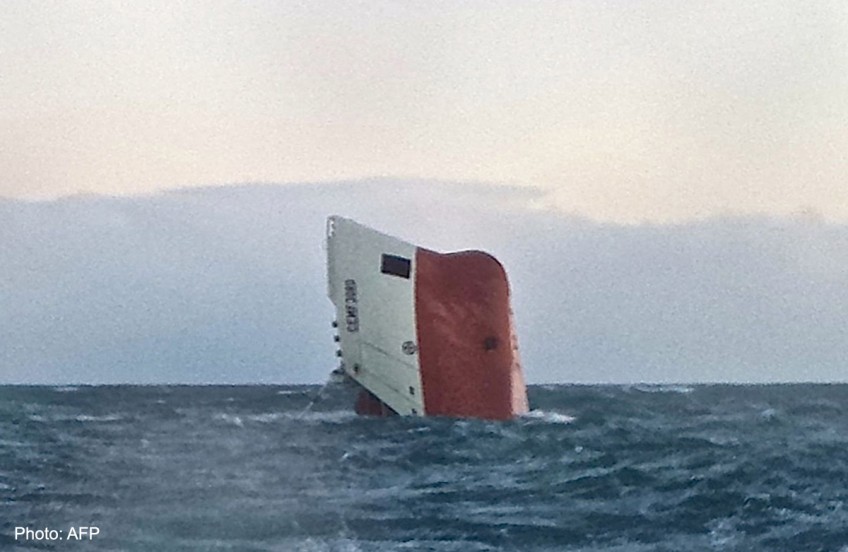 LONDON - Eight crew members onboard a cargo ship that sank off the coast of Scotland were presumed dead on Monday, two days after the vessel capsized in stormy weather.

An extensive search effort involving aircraft and boats was suspended on Sunday evening and will not be restarted, the Maritime and Coastguard Agency said.

"The search won't be resumed," a spokeswoman told AFP.

She said that vessels in the area were being asked to keep a look out, but conceded there was little chance that the crew had survived.

Seven Poles and one Filipino were on board the Cypriot-registered Cemfjord, a cargo ship carrying cement, when it capsized on Saturday around 15 miles (24 kilometres) from Wick on the northeast tip of Scotland.

An investigation is underway but Tony Redding, a spokesman for German shipping company Brise of Hamburg, which manages the ship, said the weather was likely to blame.

"We look for abnormalities and at the moment we don't have any apart from the fact that there was severe weather at the time," he said.

He added: "It will take some time to put the picture together because, sadly, we're not in a position to interview the crew and the vessel is submerged in around 68 metres (223 feet) of water." Built in 1984, the 83-metre vessel was last inspected in December.

It was carrying a cargo of 2,000 tonnes of cement from Aalborg in Denmark to Runcorn near Liverpool on the northwest English coast.