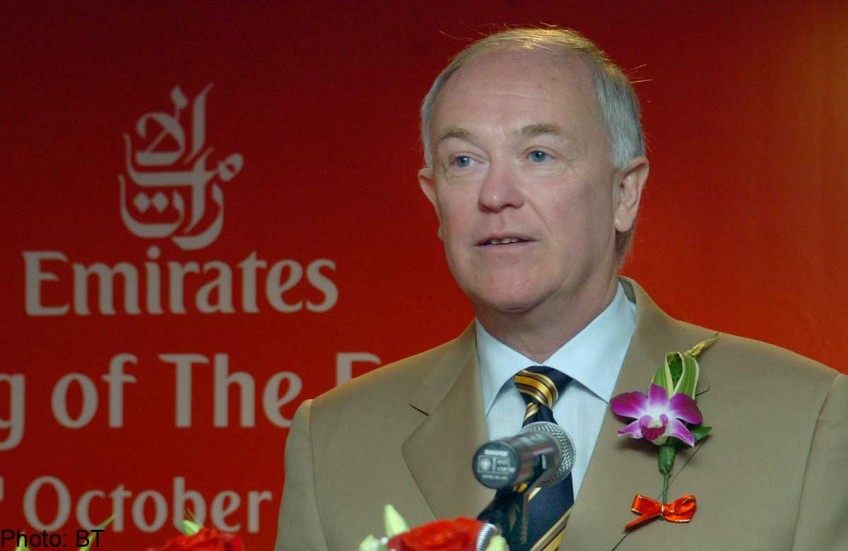 PARIS - The head of one of the world's largest airlines has called for an international meeting of carriers to agree a response to the downing of a Malaysian airliner, including a potential rethink of the threats posed by regional conflicts.

Tim Clark, president of Dubai's Emirates, the world's largest international airline by number of passengers, also said domestic regulators worldwide may decide to be more involved in giving their carriers guidance on where it is safe to fly. "The international airline community needs to respond as an entity, saying this is absolutely not acceptable and outrageous, and that it won't tolerate being targeted in internecine regional conflicts that have nothing to do with airlines," Clark told Reuters in a telephone interview.

Downing of MH17: All the latest reports

He said the International Air Transport Association could call an international conference to see what changes need to made in the way the industry tackles regional instability.

The head of the Geneva-based group, which represents about 200 global airlines, said last week they depended on governments and air traffic agencies to advise which airspace is available.

But Clark - who described himself as "incandescent with rage" when he heard of the attack on the airliner and its almost 300 passengers - said IATA and a United Nations body, the International Civil Aviation Organisation, could take action. "If you go East to West or vice-versa between Europe and Asia, you are likely to run into areas of conflict," Clark said. "We have traditionally been able to manage this. Tripoli and Kabul were attacked, Karachi was attacked and we have protocols and contingencies and procedures to deal with this," he said. "That was up until three days ago. Now I think there will have to be new protocols and it will be up to ICAO and IATA and the aviation community to sort out what the protocols have to be." He dismissed suggestions that airliners should be equipped with anti-missile devices, an idea previously aired when an Airbus A300 cargo plane was struck by a shoulder-launched missile after taking off from Baghdad in 2003. "Some people say planes should be armed with counter devices. That will go absolutely nowhere. If we can't operate aircraft in a free and unencumbered manner without the threat of being taken down, then we shouldn't be operating at all." MORE ADVISORIES A spokesman for IATA was not immediately available for comment but industry sources said it was consulting airlines.

Founded in Havana in 1945, IATA began as a quasi-official body and helped to shape the modern aviation industry.

It has evolved into an industry lobbying group while maintaining a role in setting standards - including the urgent search for better tracking systems after the disappearance of another Malaysia Airlines jet, MH370, in March this year.

The UN's International Civil Aviation Organisation oversees aviation as one of the many diplomatic organisations born out of World War II, but has few direct policing powers and does not have the right to open or close national airspace. "They can't (close airspace), but they can issue advisories and they may be a little more active," Clark said.

Additionally, he said, national regulators "may start getting involved a little more than they have. They have perhaps left airlines to their own devices".

He said he was not aware of any warnings from outside the industry about the escalating threat in Ukraine, which would change the way airlines think about ground-based conflicts and the risk of flying over some of the world's flashpoints. "Yes, the airline industry was aware there was shooting at a low level and assumed these were low-grade surface-to-air weapons," he said. "This was wrong as we now know. Nobody in their wildest dreams thought anybody could have done (such a) calculating act of mass murder." Clark, who is viewed as one of the airline industry's most influential leaders, said the Ukraine disaster should not be allowed to eclipse or diminish efforts to find MH370, an identical Boeing 777 which disappeared with 239 people on board.

The disasters, and with them more than 500 deaths, have plunged the industry into intense introspection that is expected to lead to changes in the way passenger aircraft and the threats surrounding them are monitored and assessed.