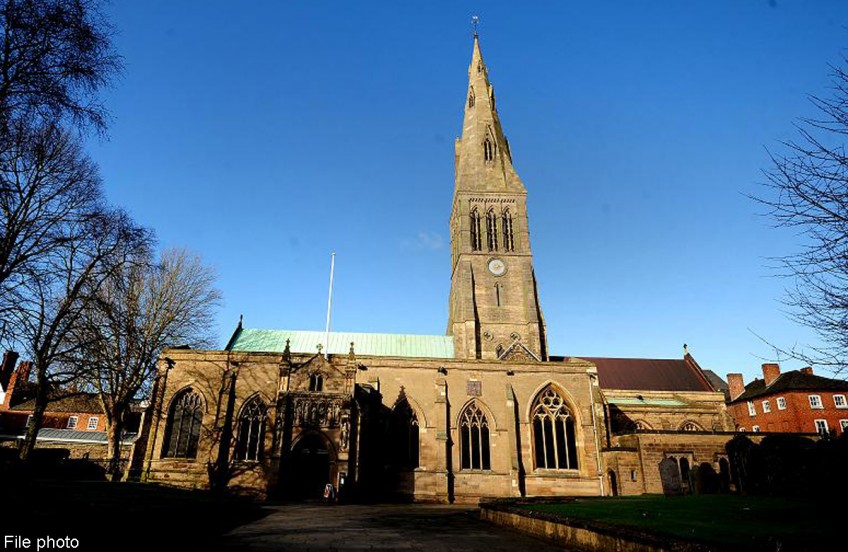 Dug out of a municipal car park five centuries after his mutilated body was unceremoniously interred, England's Richard III will finally be given a burial fit for a king this week.

Some 530 years on from his violent death in 1485, the last English monarch killed in battle will be laid to rest on Thursday in Leicester Cathedral, across the street from where his remains were located in 2012.

Their discovery was confirmed by a DNA match with Richard's closest living relative - Canadian carpenter Michael Ibsen, who fittingly has now made the monarch's oak coffin.

In an unprecedented event, the medieval king will be reinterred in the presence of royalty and England's highest cleric, in a solemn service broadcast live on national television.

"The story of the king in a car park (is) now so familiar around the world to many who had heard little of Richard III," said Tim Stevens, the bishop of Leicester in central England. "Now we look forward to welcoming people from around the world to become part of... our task of laying the king to rest with dignity and honour."

Richard, the last of the Plantagenet dynasty, ruled England from 1483 until his death at the Battle of Bosworth near Leicester in 1485. It was the last major conflict in the Wars of the Roses and Richard's defeat saw the crown pass from the Plantagenets to the opposing Tudors.

"We're looking forward to the opportunity to remind people of the extraordinary moment in English history the death of Richard III marks," said Stevens.

The slain 32-year-old was swiftly buried without fanfare at Greyfriars monastery in Leicester. Greyfriars was demolished in the 1530s during Tudor king Henry VIII's dissolution of the monasteries and Richard's remains were thought lost.

But members of the Richard III Society of enthusiasts teamed up with Leicester University archaeologists to excavate the site, rightly predicting whereabouts in the old church he would have been buried. They found a skeleton consistent with contemporary descriptions of the king, notably his curved spine, and battle injuries. Radiocarbon dating showed the man died between 1455 and 1540.

"It is incredibly lucky anything survived at all," said Greyfriars Project site director Mathew Morris, explaining that Victorian building work had come within a centimetre of Richard's skull. By coincidence, the remains were beneath a letter R indicating a reserved space in the car park. "Skeleton 1" had eight head wounds, including a brutal slash to the base of skull which cleaved away bone. Another blow had pierced his skull.

DNA testing on Ibsen and Wendy Duldig, both descendants of Richard's eldest sister Anne of York, confirmed they were both related to "Skeleton 1". The tests also threw up a mystery with a "false paternity" finding that there was no match through the male line of the family, indicating an illegitimate child in the royal line. With no precedent to consult, finding Richard's remains triggered impassioned wrangling over what to do next.

Following a judicial review, his bones are being reinterred in Leicester rather than York, his northern stronghold. Cynics said the rival cities had one eye on creating a visitor attraction. London's Westminster Abbey was also sidelined.

A week of events leading up to the reburial begins Sunday when the coffin will be taken outside Leicester to Fenn Lane Farm, the closest place to the site of his death.

The cortege returns to Leicester for a horse-drawn procession through the city to the cathedral, where Cardinal Vincent Nichols, the leader of England's Catholics, will preach a sermon. Richard was a Catholic but will be reburied in the traditions of the Church of England, although there will be Catholic elements in services throughout the week.

The public can view the coffin from Monday, when Nichols, the archbishop of Westminster, will celebrate a requiem mass in Leicester's main Catholic church. Then on Thursday, Richard's remains will be reinterred in the presence of the Archbishop of Canterbury Justin Welby, the spiritual head of the Church of England.

Queen Elizabeth II's daughter-in-law Sophie, the Countess of Wessex, will attend, as will her cousin Prince Richard the Duke of Gloucester, patron of the Richard III Society and a blood relative.

The discovery of his skeleton has encouraged scholars to look again at Richard's record of social reform, rather than rely on William Shakespeare's Tudor-era portrayal of him as a villainous tyrant murderer.

Philippa Langley, whose research led to the dig, told Radio Times magazine that Richard was "loyal, brave, pious and just". She added: "I don't understand why he isn't getting a state funeral. He's an anointed monarch."

David Monteith, the dean of Leicester Cathedral, said there was a sense of "trying to put some things right from the past" for the brutally murdered king. "But I'm aware you can't undo history," he said.