The Austro-Hungarian border in Nickelsdorf, Austria.

Europe plans to shut its border to the rest of the world for a month, the European Commission announced on Monday in an unprecedented escalation of the response to the Covid-19 pandemic.

Under the European Union's proposal, which requires tentative approval by all member states on Tuesday, non-EU citizens will be barred from entering the Schengen border-free travel region for 30 days.

The move comes as the outbreak shows no sign of slowing down across the continent, which accounts for nearly a third of all 164,000 known infected cases globally, according to World Health Organisation statistics.

France, Germany and Britain have stepped up their restrictions on social activities, with France expected to go into a 15-day lockdown starting on Tuesday.

Italy, the second hardest-hit country after China, has said it needs a reconstruction plan after the outbreak; Spain is in lockdown mode with the number of cases nationwide approaching 10,000.

The United States has already banned travellers from Europe, including Britain.

The Schengen region covers 26 European countries except Britain and Ireland, which have not announced a plan to block access to the country by international visitors.

Under the EU's proposed ban, exemptions would be granted to travellers working in medical or scientific fields related to the coronavirus pandemic.

Von der Leyen also called on EU member states - many of which have re-established checkpoints on their borders - to avoid disrupting the movement of goods.

"We recommend installing green corridor fast lanes for good transfers so the traffic jams will end," she said.

In France, President Emmanuel Macron, declaring "we are at war" with the coronavirus, announced a series of measures designed to protect residents, including requiring them to stay home unless necessary for the next 15 days, starting at midday on Tuesday.

Those who flout the regulations would be punished, Macron warned, adding that a second round of local elections would be postponed until an unspecified day. 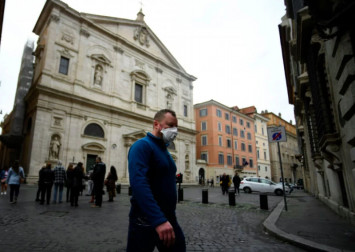 Macron's approach - enforcing measures through legal means - was stricter than that of his British counterpart, Prime Minister Boris Johnson, who on Monday only advised Britons to avoid "non-essential" contact with others and "unnecessary" travel.

The British leader stopped short of announcing closures of public venues, as his French counterpart did, but also advised people to work from home where possible and to avoid pubs, clubs, theatres and social venues.

Johnson aimed his toughest measures at the elderly, saying that within days, this "at-risk group" would be asked to shield themselves from social contact for 12 weeks.

Meanwhile, German Chancellor Angela Merkel stopped short of announcing a state of emergency in her country on Monday but ordered all "non-essential" shops, bars, religious facilities and sporting venues closed for an unspecified period.

Food and drug stores will remain open, she said in a press conference on Monday.

"We have not seen a situation like this in the 70 years since the founding of the republic," Merkel said.

She also called on Germans to refrain from unnecessary travel abroad, saying the risk of not being able to return was too high.