Palestinians protest against the publications of a cartoon of Prophet Mohammad in France and French President Emmanuel Macron's comments, following Friday prayers on the compound known to Muslims as Noble Sanctuary and to Jews as Temple Mount in Jerusalem's Old City, on October 30, 2020.

Schools and hospitals in western Europe are likely to be the next targets of ‘lone wolf’ terrorists unless French President Emmanuel Macron apologises for his remarks on Islam and for defending the publication of cartoons featuring the Prophet Mohammed.

That’s the view of analysts who spoke to This Week in Asia following three deadly terror attacks over the past month in France and Austria.

“At this point no state is immune to terrorism. It could happen tomorrow in Germany, Spain, Denmark, the UK, Belgium,” said Olivier Guitta, managing director of GlobalStrat, an international security firm, warning that schools and hospitals were among “likely potential targets in the next few months”.

He said countries across Europe needed to raise their threat levels – as Britain did last week – following attacks in Nice and Vienna, as jihadist groups had been calling for further attacks at a time when “antagonism with Western values” was increasing.

Britain has raised its terror threat level to “severe” following the attacks, meaning an incident is considered “highly likely”.

Western Europe has been shocked by a string of deadly attacks that began on October 16, when French high schoolteacher Samuel Paty was beheaded by an attacker angered that he had shown his students cartoons of the Prophet published in 2015 by the satirical newspaper Charlie Hebdo .

Muslims consider any depiction of the Prophet as blasphemous. On Oct 29 three people were killed in a knife attack in the French city of Nice and on November 2 a heavily armed man shot dead four people in Vienna, Austria.

Islamic State activists were now positioning the killer of the French teacher as a role model for others, said Nico Prucha, a expert on the terror group who monitors jihadist activity online.

“The video of the attacker and the head of the French victim have been shared online together with [theological books] that are not produced by Islamic State or al-Qaeda but suit their theological narrative underlining that any disbeliever who insults the Prophet must be killed and that nations of Europe are engaged in a war against Islam,” Prucha said.

Among the books being shared online was one by Ibn Taymiyya, a 13th century Muslim scholar who wrote that whoever insulted the Prophet “must be killed, no matter if he is a Muslim or disbeliever, and has no right to repent”.

Prucha said jihadists had used Ibn Taymiyya’s writings to justify specific attacks and promote the idea that vengeance restored the dignity of the Prophet.

“They command individuals worldwide to demonstrate their faith by responding violently to those who insult the Prophet,” he added.

In each of the recent attacks the perpetrator is thought to have acted as a ‘lone wolf’ – perhaps inspired by, but without direct instruction from, a terror group such as Islamic State or al-Qaeda.

“Unless some form of organisational link is proved, and at the moment it does not look like there is a link, we are dealing with individuals acting on their own initiative, who probably have decided to act out of opportunistic considerations and with a sort of copycat dynamic,” said Ludovico Carlino, principal analyst at IHS Markit’s Country Risk and Forecasting team.

Experts say terror attacks in Europe are now far more likely to be carried out by radicalised individuals with no clear ties to organised terror groups, rather than sophisticated plots unleashed by extremist networks such as the 2015 Paris attacks in which Islamic State gunmen and suicide bombers hit a concert hall, stadium, restaurants and bars killing 130 people and wounding hundreds.

Guitta said Islamic State had been unable to carry out an organised attack in Europe since 2016.

“What has happened since then in terms of terrorism were low-intensity, not sophisticated, attacks perpetrated by lone individuals either loosely linked to [Islamic State] or doing it on their own,” said Guitta.

Carlino said Islamic State was no longer the same organisation that had once controlled vast swathes of territory in Syria and Iraq and was able to “to plot and execute external operations in Europe”.

“Now the main threat stems from radicalised individuals with little or no connections to organised groups but still attracted by the jihadist narrative and ideology,” Carlino said.

Ahmet Yayla, director of the Center for Homeland Security at DeSales University, Pennsylvania, said there were no mobilised Islamic State or al-Qaeda-affiliated cells in Europe.

“Otherwise we would already have seen an attack in an effort to capture the moment,” said Yayla.

Macron has sparked fury and protests across the Muslim world both for his defence of the publication of the cartoons – on the grounds of freedom of speech – and for an earlier speech in which he announced his intention to fight “Islamist separatism” and described the faith as being “in crisis”.

Some experts have warned terrorist attacks will continue unless Macron apologises.

Indonesian National Police Commission head Benny Mamoto said recently that “as long as Macron does not apologise or hold a dialogue to explain the situation … attacks will continue”.

Mamoto is a retired police general who investigated the 2002 Bali bombings by the Jemaah Islamiah group that killed 202 people, including 11 Hong Kong residents. 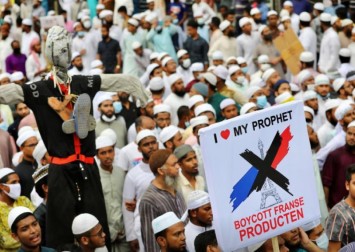 Meanwhile, a former senior figure of al-Qaeda in Southeast Asia told This Week in Asia that Macron’s words had “insulted Islam”, violated people’s rights and could awaken “sleeper cells from [Islamic State] and al-Qaeda” in Europe.

“Macron’s words could trigger greater extremism and tensions between the West and Islam. The Prophet is sacred for Muslims,” Sofyan Tsauri said.

Sofyan spent five years in an Indonesian prison for helping to arm terror groups. He was released in 2015 and now helps to counter extremism by sharing his knowledge at seminars.

Yayla said Macron’s comments had played into the hands of extremist groups.

“Words and empathy mean a lot when it comes to countering terrorism. Unnecessary and extreme rhetoric targeting all Muslims ... further alienates the Muslims living in France. At the end of the day, this is what the terrorists want,” said Yayla.

Yayla said Macron needed to defuse the situation by calling for calm and by reaching out to Muslim minorities to emphasise that his target was only the violent actors.

Tsauri suggested Macron could learn from Russia’s President Vladimir Putin , who has said that freedom of expression does not mean the right to insult “other religions”. 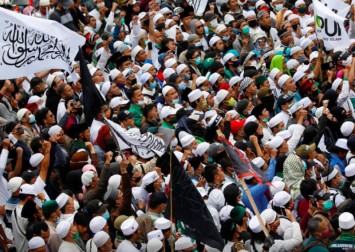 “Every faith lives in full respect of each other. That’s why the existence of such a publication is impossible here, including when taking into account our existing laws,” Peskov was quoted as saying by the Moscow Times last week.

Another two suspects from the Islamic State-linked Jemaah Ansharut Daulah were arrested in Padang, Sumatra.

“These two were planning terror attacks targeting police in Padang,” said the source.