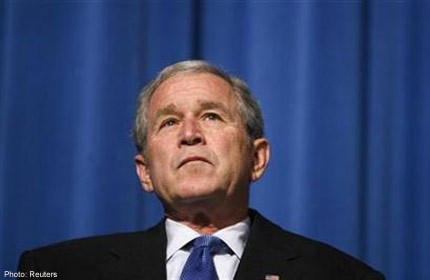 The 41st president "had another terrific day and is in great spirits," his spokesman Jim McGrath said, without explaining why the president was being hospitalized an extra night.

His wife Barbara, his son Neil and daughter-in-law Maria Bush visited him at hospital.

He "received well wishes from family, friends and fellow citizens," McGrath said in a statement.

"He asked that his sincere wishes for a very Merry Christmas be extended to one and all." Late Wednesday, McGrath had said the former president's prognosis "remains positive." The oldest of the four living former US presidents, Bush, who is wheelchair-bound, seemed frail in recent public appearances.

He was treated at Houston Methodist in November 2012 for bronchitis, and ended up spending nearly two months at the hospital.

The former president's wife was admitted to the same Houston hospital where he is being treated nearly a year ago.

Suffering from pneumonia, the former first lady was released from the hospital in January.

Bush, patriarch of one of America's most prominent political dynasties, is father to former US president George W. Bush.

Another son, Jeb, last week announced that he was laying the foundation for his own 2016 White House bid.