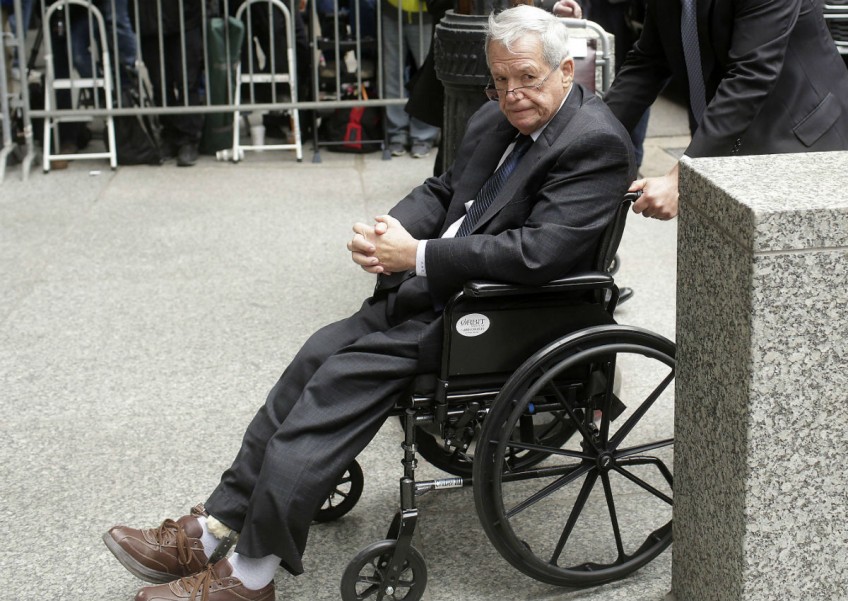 Former US House speaker Dennis Hastert was sentenced to 15 months in prison Wednesday for paying hush money related to the sexual abuse of a teen boy he coached in high school.

Shortly before the sentence was handed down, the 74-year-old admitted for the first time he sexually abused boys when he taught wrestling at Yorkville High School in Illinois from the 1960s to the early 1980s.

US District Judge Thomas M. Durkin was reported as telling Hastert: "Nothing is more stunning than having the words serial child molester and speaker of the House in the same sentence." Prosecutors have provided details of abuse of at least five boys as young as 14, in cases dating back decades for which the Republican politician can no longer be tried.

"What I did was wrong and I regret it," Hastert, who attended the court hearing in Chicago in a wheelchair, said as he admitted the abuse under sustained questioning.

"They looked to me and I took advantage of them," he added, according to comments reported by the Chicago Tribune.

Judge Durkin also ordered Hastert to pay a $250,000 fine to a crime victims' fund and set two years of supervised release on the condition he participate in a treatment program for sex offenders.

Lawyers for Hastert, who suffered a stroke last year, had pointed to his ill health to ask for probation.

Hastert "takes sole responsibility for this tragic situation and deeply apologizes to all those affected by his actions," they said in a statement.

The longest-serving House speaker in US history, Hastert occupied the role from 1999 to 2007, putting him second in the line of succession to the US presidency.

Last year, Hastert pleaded guilty to illegally structuring bank withdrawals to avoid reporting where he was sending funds as part of a $3.5 million settlement over the abuse, said to have been committed three decades ago.

Statutes of limitations have long passed on the sexual crimes, so he was only charged with breaking financial laws.

Federal prosecutors say Hastert paid the man a total of $1.7 million - a little less than half the agreed amount - between 2010 and 2014 in regular payments that only stopped when the government started investigating him.

The victim who received those payments, identified as "Individual A" in last year's federal indictment against Hastert, filed a lawsuit Monday seeking the $1.8 million still missing under their agreement.

That lawsuit claims that Hastert "violated the special trust" the victim placed in him by "sexually molesting and abusing plaintiff in a motel room" on a wrestling team trip.

At Hastert's sentencing hearing, another victim took the stand and revealed his identity - as the brother of a longtime political ally of Hastert.

Scott Cross said Hastert violated him when the two were alone in a wrestling room.

Hastert "told me he could help me lose weight by giving me a massage," Cross was quoted as saying in his testimony.

"I trusted what he was saying and took him at his word." When the abuse started, "I was stunned by what he was doing," said Cross, whose elder brother Tom Cross was a longtime Illinois Republican House leader.

Federal prosecutors hailed the victims for speaking up about the abuse.

"All of us have been inspired by the strength and bravery of the victims and witnesses who came forward in the most challenging of circumstances," the US Attorney's Office for the District of Illinois said.

"It is our hope that the sentence imposed today will promote respect for the law." Hastert resigned from Congress after allegedly turning a blind eye to a scandal involving another former lawmaker - Mark Foley - who sent sexually explicit or suggestive messages to teenage pages.