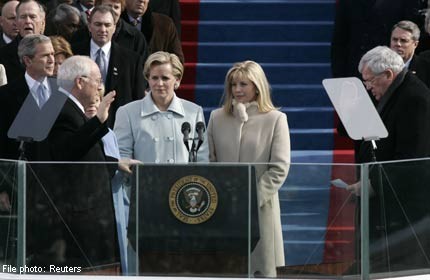 WASHINGTON - Liz Cheney announced Tuesday she will run for the US Senate in 2014, six years after her father Dick Cheney's two terms as vice president.

"I'm running because I believe it is necessary for a new generation of leaders to step up to the plate," the 46-year-old Republican, from the conservative western state of Wyoming, said in a statement.

The younger Cheney's bid puts her on a collision course with the state's senior Senator Mike Enzi, 69, a member of the Republican old guard and one of the Senate's more conservative members.

Enzi, who reportedly received a call from Cheney recently saying she would challenge him in the Republican primary, last week announced his bid for a fourth term.

Cheney, a lawyer and political novice who recently moved back to Wyoming with her family and has begun making appearances at Republican Party events, made no mention of Enzi in a five-minute video statement.

Instead, she focused on what she described as an attempt by President Barack Obama to dramatically expand "the power of the federal government."

"The last four and a half years have been particularly devastating," she said, citing the White House's "war" on gun rights and religion, a soaring national debt, and allegedly excessive intrusions by the Environmental Protection Agency.

"Instead of cutting deals with the president's liberal allies, we should beopposing him every step of the way," she said.

But Cheney first will have to oppose the low-profile, affable Enzi, and that may well unleash a political firestorm in Wyoming, party insiders say.

Chamberlain said he considers the Cheneys close family friends, but "I don't know anyone that doesn't want (Enzi) to run again."

Wyoming GOP committeewoman Marti Halverson said she and others had heard "rumblings" about a possible Cheney run for months, but she acknowledged Enzi's broad appeal in the state.

"He is beloved for his conservative efforts for Wyoming," she said.

Cheney, who has been a Fox News political commentator in recent years, appeared alongside her father Dick Cheney at the 2012 Republican Party convention.