LONDON - The family of a man suspected of driving a rented van into Muslim worshippers after they left prayers at a north London mosque said they are devastated at the"madness" of the attack.

The vehicle swerved into the group of worshippers, mainly of North and West African origin, after they left prayers in the early hours of Monday at the Muslim Welfare House and the nearby Finsbury Park Mosque in north London, one of the biggest in Britain, injuring 11.

Police said it was clearly targeted at Muslims and Prime Minister Theresa May described it as a "sickening" terrorist attack.

A 47-year-old man was restrained by locals at the scene and police later arrested him on suspicion of attempted murder and terrorism offences. He is still being questioned by detectives.

The suspect was named by British media as Darren Osborne, 47, a father-of-four, who lived in the Welsh capital Cardiff.

In a statement given to local media on behalf of his family, his nephew Ellis Osborne said: "We are massively shocked; it's unbelievable, it still hasn't really sunk in."

"We are devastated for the families, our hearts go out to the people who have been injured. It's madness. It is obviously sheer madness." 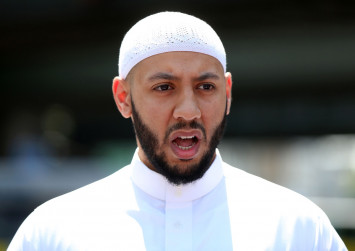 The incident at Finsbury Park was the fourth attack in Britain since March and the third to involve a vehicle deliberately driven at pedestrians. The previous attacks had been blamed on Islamist extremists.

The latest attack comes at a tumultuous time for the government with Britain starting complex divorce talks with the European Union and May negotiating with a small Northern Irish party to stay in power after losing her parliamentary majority in a snap election that backfired.

An imam from the Muslim Welfare House who stepped in to protect the driver from the angry crowd after the incident was hailed as a hero in British newspapers on Tuesday.

"We found that a group of people quickly started to collect around him ... and some tried to hit him either with kicks or punches," Mohammed Mahmoud told reporters.

"By God's grace we managed to surround him and to protect him from any harm."

Security Minister Ben Wallace said the man was not known to the security services and police said they believed he was acting alone.

They were carrying out searches of addresses in Cardiff where the vehicle hire company that the van was rented from was based.