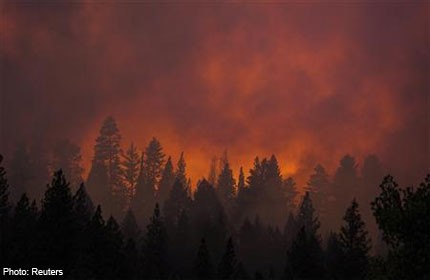 The sun sets on the Rim Fire near Buck Meadows, California.

SAN FRANCISCO - A wildfire raging at the edge of Yosemite National Park is threatening power lines that provide electricity to San Francisco, prompting California Governor Jerry Brown to declare a state of emergency.

The fire has damaged the electrical infrastructure serving the city, and forced the San Francisco Public Utilities Commission to shut down power lines, the governor said in his declaration.

There were no reports of blackouts in the city, which is about 200 miles (320 km) west of the park.

The wildfire swept further into Yosemite National Park on Friday, remaining largely unchecked as it threatened one of the country's major tourist destinations.

The so-called Rim Fire, which started last week in the Stanislaus National Forest, had blackened 11,000 acres (4,450 hectares) at the northeastern corner of Yosemite as of Friday afternoon after exploding in size overnight, park spokeswoman Kari Cobb said.

The blaze burning in the western Sierra Nevada Mountains is now the fastest-moving of 50 large wildfires raging across the drought-parched US West that have strained resources and prompted fire managers to open talks with Pentagon commanders and Canadian officials about possible reinforcements.

The park has been posting updates and alerts on its website. (Alerts: http: www.nps.gov/yose/index.htm)

The blaze, which has now charred a total of 165 square miles of forest land, mostly outside of Yosemite, was about 4 miles west of Hetch Hetchy Reservoir and some 20 miles from Yosemite Valley, the park's main tourist center, Cobb said.

The reservoir provides water to 2.6 million customers in the San Francisco area. Should the blaze affect the reservoir, the city's water supply could be affected, Brown said in his declaration.

The Rim Fire, named for a Stanislaus National Forest lookout point called Rim of the World, has so far destroyed four homes and 12 outbuildings and was only 2 percent contained as of Friday.

Highway 120, one of four access routes to a park known for its waterfalls, giant sequoia groves and other scenic wonders, was temporarily closed. The highway leads to the west side of the 750,000-acre (300,000-hectare) park.

The fire was also threatening 4,500 homes, up from 2,500 on Thursday, and an undisclosed number of homes were ordered evacuated on Friday, adding to earlier evacuations.

In Idaho, meanwhile, crews increasingly had the upper hand over a massive blaze near the ski resort town of Sun Valley, as a storm system predicted to bring lightning and high winds brought rain instead.

The so-called Beaver Creek fire, now 67 percent contained, at its peak forced out occupants of 2,250 houses in upscale neighborhoods outside Sun Valley and destroyed one home and seven other buildings in a resort area in central Idaho where land and properties are valued at up to $8 billion.

The 2013 fire season has already drained US Forest Service fire suppression and emergency funds, causing the agency to redirect $600 million meant for other projects like campground and trail maintenance and thinning of trees to reduce wildfire risks, said agency spokesman Mike Ferris.

The service has spent some $967 million to protect lives and properties amid a season that has seen fires in Idaho, Utah, Colorado and California threaten homes and communities that border forest and wild lands where fire is more dangerous and costly to fight, Ferris said.

With hotshots and other elite fire crews stretched thin, US fire managers will decide in coming days whether to seek US military or international aid to check the roughly 50 large fires burning in the West.