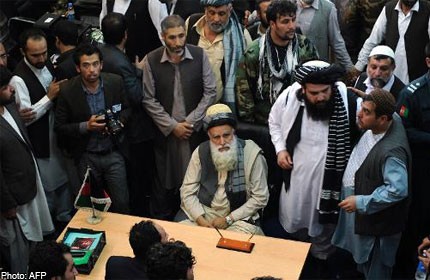 KABUL - Afghanistan's presidential election race has sparked a last-minute rush of candidates before nominations close Sunday for next April's poll, with former finance minister Ashraf Ghani among the leading names to register.

The final days of the nomination period were marked by a frenzy of intrigue as former warlords, tribal leaders and veteran politicians cut deals and formed rapid alliances in the first stage of the race to succeed President Hamid Karzai.

Karzai, who has ruled since the fall of the hardline Taliban in 2001, must step down next year as the Afghan government seeks a peace deal with the Taliban and the NATO-led military coalition withdraws after 13 years of fighting.

"We need basic reforms to combat corruption, bring in the rule of law, and ensure justice and welfare for the young," Ghani said in a speech after submitting his papers.

Foreign Minister Zalmai Rassoul and Qayum Karzai, the president's elder brother, are also likely to register as late entries in the wide-open race.

The two big-name candidates to have already declared are Abdullah Abdullah, the runner-up in the 2009 presidential vote, and Abdul Rab Rasoul Sayyaf, a former warlord with previous links to Al-Qaeda.

Karzai, who retained power in 2009 amid allegations of massive fraud, has vowed not to endorse any candidate - but many of his supporters are looking for covert signals to reveal his favoured candidate.

International donors, led by the US, see the elections as the key test of progress after 12 years of military intervention and billions of dollars of aid to try to develop Afghanistan since the fall of the Taliban regime.

Jan Kubis, head of the UN mission in Kabul, said on Thursday that holding a credible election on time was the "best argument" Afghanistan could make for securing further international support.

NATO combat troops will pull out by the end of next year. Some 87,000 soldiers - 57,000 of them from the US - are currently deployed to fight the insurgents and train the local army and police.

Four NATO soldiers were killed fighting in south Afghanistan on Saturday, underlining the continuing cost of the war. Their nationalities were not immediately released.

The size of the final election field remained uncertain, but Karzai has called for just two or three contestants by polling day to avoid the chaos of the 2009 vote when 40 names appeared on the ballot paper.

Peace talks with the Taliban and a deal to allow some US troops to remain in the country after 2014 are likely to be two hot topics of debate as Afghanistan prepares for its first ever democratic transfer of power.

Early attempts to start a peace process floundered in June, but Washington and other foreign powers all support a negotiated end to the long war.

The Taliban, who targeted previous elections, have refused to open talks with Karzai, dismissing him as a puppet of the US. He is constitutionally barred from standing for a third term in office.

After nominations close at 4:00 pm (1130 GMT), the Independent Election Commission will verify the elegibility of each candidate and their two vice-presidential picks.

A final list of runners will be announced on November 16, with official campaigning beginning in February.