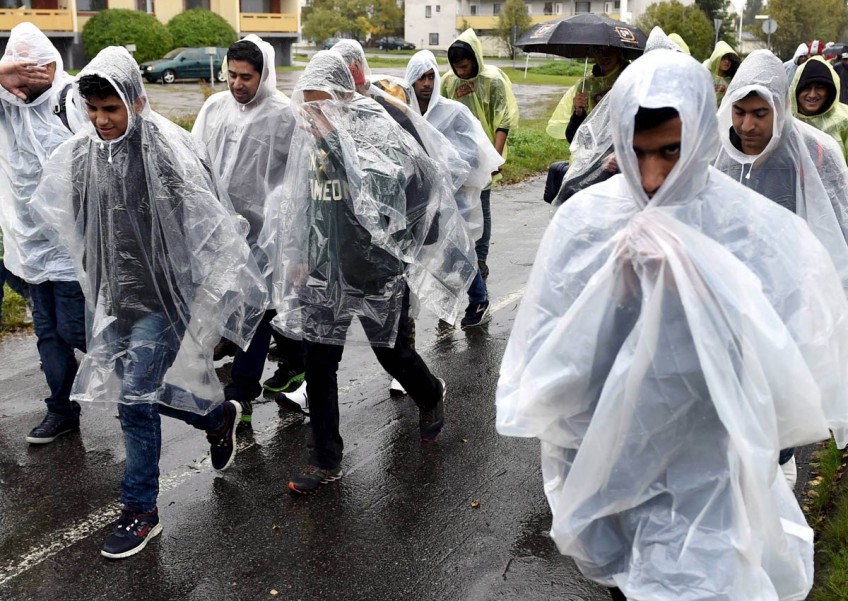 Refugees walk through the pouring rain from a public transport centre to the Lappia-building refugee reception centre in Tornio, northwestern Finland, on September 2015.
AFP

HELSINKI - Finland is experiencing its biggest influx of refugees since the Russian Revolution with hundreds of migrants arriving each day via Sweden, but their presence is angering some in the recession-hit country.

Finland, whose Lapland steppe forms the European Union's northernmost border, expects to receive 25,000 to 30,000 asylum applications this year, compared to 3,600 in 2014.

Most of those arriving are from Iraq, Somalia or Afghanistan. After an exhausting and often perilous journey to Europe, they travel to the northern Swedish town of Haparanda, turning their backs on Sweden's long processing times to instead cross the border by foot into the Finnish town of Tornio. Most of them then head south to the capital Helsinki or other towns.

According to the Finnish Immigration Service, hundreds of migrants have been crossing into Finland every day in recent weeks, the biggest influx since 1919 when "Whites" fled the "Reds" during the Russian Revolution.

More than 11,000 refugees arrived in Finland in the first eight months of the year, a number five times fewer than in neighbouring Sweden - but Finland's population is half the size of Sweden's and the country lacks the infrastructure Sweden has to welcome large numbers of refugees.

Observers have in recent weeks been surprised to see so many migrants travelling through Sweden to seek asylum in Finland, given Sweden's reputation as a generous welcomer of refugees.

But according to statistics, Iraqis stand a better chance of being granted asylum in Finland.

A total of 54 percent of Iraqi requests were granted in Finland in the first six months of the year, compared to 33 percent in Sweden. Case processing times are also shorter in Finland than in Sweden.

"Sweden is good for Syrians, but bad for Iraqis. I read that on Facebook," Ali, a 17-year-old Iraqi asylum seeker recently told AFP.

From the country's isolated villages near the Arctic Circle to the shores of the Baltic Sea, the large influx of refugees has riled some Finns, particularly those hit by high unemployment and housing shortages.

They are particularly attuned to the arguments of the populist Finns Party, the second-biggest party in the country and whose leader Timo Soini is also the foreign minister.

"We will fight until the end for our homeland and one true Finnish nation," Finns Party member of parliament Olli Immonen tweeted last week, angering even some within his own party.

'Human wall' at the border

With 5.5 million inhabitants, Finland has not been known as a major destination for immigrants in the past century.

After gaining independence first from Sweden and then Russia, Finns have tried to build up a national identity nourished by literary epics and tales of their soldiers' exploits against the Red Army in World War II.

Finland has also long been a country of emigration, and even its formerly world leading industries - paper mills and Nokia, which used to be the world's biggest mobile phone manufacturer - never required any major import of foreign labour.

Only around five percent of inhabitants are of foreign origin, mainly from Russia and Sweden as well as smaller groups from Somalia and Iraq, official statistics show.

On Saturday, anti-immigration demonstrations were held in several Finnish towns.

In Tornio, up to 600 people blocked the border post for a short while, waving the Finnish blue-and-white flag, police said.

The "far-right" demonstrators formed a "human wall" on the border, Peter Waara, a Social Democratic town councillor who was taking part in a counter-demonstration on the other side of the border, told AFP.

The Finnish Immigration Service is scheduled to open a new asylum reception hub in Tornio on Tuesday in an old high school.

All refugees who arrive via the north will have to be registered at the hub before being relocated to asylum centres elsewhere in the country while their asylum requests are being processed.

"It is primarily about ensuring that we have control over the situation," Interior Minister Petteri Orpo said.