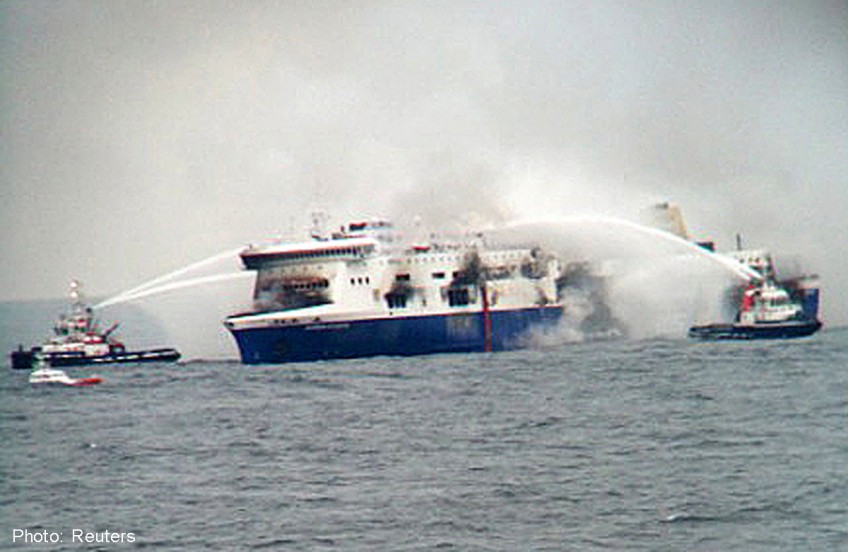 BRINDISI, Italy - The Italian-owned ferry in which at least 13 people died in a dramatic fire in stormy Mediterranean seas was towed into the Italian port of Brindisi on Friday as investigators try to determine if there are any more bodies on board.

The arrival of the Norman Atlantic, which was disabled after catching fire Sunday en route between Greece and Italy, was witnessed by AFP reporters.

A prosecutor in Bari ordered the stricken ferry be brought back to Italy, citing fears that there may be dead illegal immigrants or passengers who died in their cabins still aboard the vessel.

Given uncertainty over the total number of passengers, Italian authorities are warning that the current death toll may rise.

Officials say 477 people were rescued in a dramatic offshore operation. However, the prosecutor, Giuseppe Volpe, said that almost 500 people may have been aboard, far above the 474 officially on the manifest.

Volpe said it had been "established" that illegal immigrants were aboard, something confirmed by several of the passengers who got away. The search on the ship in Brindisi is expected to concentrate on the trucks parked in the car deck where the fire started.

Meanwhile, Italian authorities on Friday managed to take control of a crewless merchant ship as it drifted toward the country's southern shores in rough seas with 450 migrants on board.