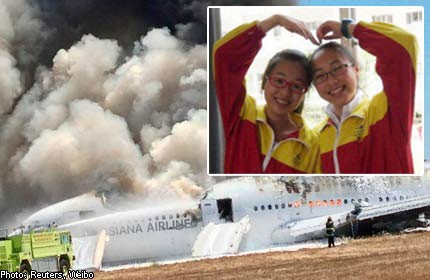 Insert: A photo from Weibo shows Ye Mengyuan (left) and Wang Linjia, who were killed in the crash of Asiana Airlines Flight 214 on July 6, 2013 at San Francisco airport.

LOS ANGELES - One of the victims of this month's Asiana Airlines jet crash in San Francisco survived impact but was killed on the tarmac when she was run over by an emergency vehicle, officials said Friday.

Results of the autopsy on 16-year-old Chinese student Ye Mengyuan, one of three people killed in the July 6 disaster, had been keenly awaited after firefighters admitted a tarmac accident was possible.

The girl, who was "alive at the time," died due to "multiple blunt injuries that are consistent with being run over by a motor vehicle," San Mateo county coroner Robert Foucrault told reporters.

San Francisco fire chief Joanne Hayes-White offered her "condolences and apologies to the family... in light of the coroner's findings in this tragic accident."

"Obviously this is very difficult news for us - we're heartbroken," Hayes-White said. "We're in the business of saving lives."

The city fire chief said the entire emergency operation was still under review.

"I continue to be very proud of all the men and women of our department.

Many of our members risked their lives to save passengers and crews that day," she said, lamenting the "tragic accident."

A police inquiry found that Ye was hidden under a layer of white foam, used by firefighters as a flame retardant in the wake of the crash upon landing of Asiana Flight 214.

Hayes-White said the vehicle involved was likely "one of the specialised rigs at the airport," adding: "There were many surrounding the aircraft."

She said fire department personnel were cooperating with both a police probe and the one led by the US National Transportation Safety Board.

The two other people killed in the crash were also female Chinese youths.

More than 180 others injured in the crash of the Boeing 777, which had left Shanghai and made a stop in Seoul before heading to San Francisco.

Two of them were still in critical condition on Friday, with "spinal cord injury, abdominal injuries, internal bleeding, road rash and fractures," San Francisco General Hospital said in an update.

The passenger jet had 307 people on board, including 16 crew members. More than 120 people escaped unharmed.

The crash was the carrier's first passenger jet crash in 20 years.

According to preliminary findings from the NTSB, the plane crashed because it was flying too low and too slowly as it approached the runway.

The tail of the aircraft broke off as the plane clipped a seawall short of the runway, skidding out of control and quickly catching fire.

It has also emerged that the otherwise experienced pilot was undergoing his first major training on the Boeing 777, and it was his co-pilot's first time working as instructor.

Asiana has argued the pair were "competent" veterans with around 10,000 flying hours including dozens of flights to San Francisco.

Officials in South Korea have said that Asiana, the country's number two airline, will be subject to a weeks-long government investigation.