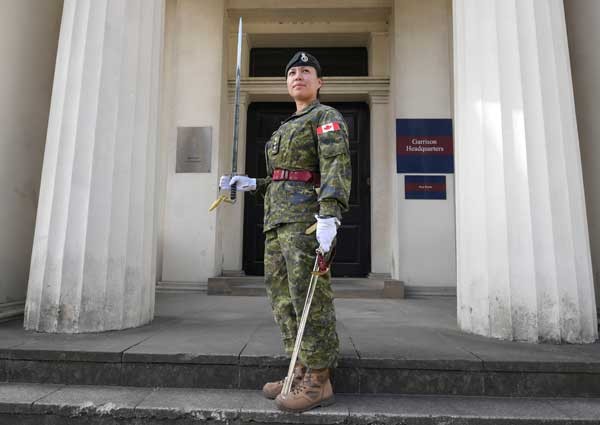 Based in the central province of Manitoba, The Second Battalion, Princess Patricia's Canadian Light Infantry has been invited to Britain to mark the 150th anniversary of the founding of modern Canada.

Queen Elizabeth is the head of state of Britain, Canada and 14 other realms including Australia, Jamaica and New Zealand.

Couto, 24, has been given the prestigious role of Captain of The Queen's Guard, responsible for guarding the London palace.

"I'm just focusing on doing my job as best I can and staying humble. Any of my peers would be absolutely delighted to be Captain of The Queen's Guard and I'm equally honoured," she said.

Carrying her sword and wearing a scarlet tunic and white Wolseley helmet, Couto marched her troops to Buckingham Palace from the nearby Wellington Barracks in the historic and colourful ceremony.

The changing of the guard, conducted on four days a week, draws thousands of tourists to Buckingham Palace and Monday was no exception, with large crowds outside the gates in summer sunshine.

"We've practised enough and all the guys have been through their paces - I've just to focus on saying the right commands.

"Princess Patricia was granddaughter to queen Victoria and born in Buckingham Palace (in 1886), so it seems to be appropriate for us to be guarding her childhood home." Elite soldiers have protected the monarch since King Henry VII established the Sovereign's Bodyguard in 1509.

It blamed the slip-up on "over-enthusiasm".