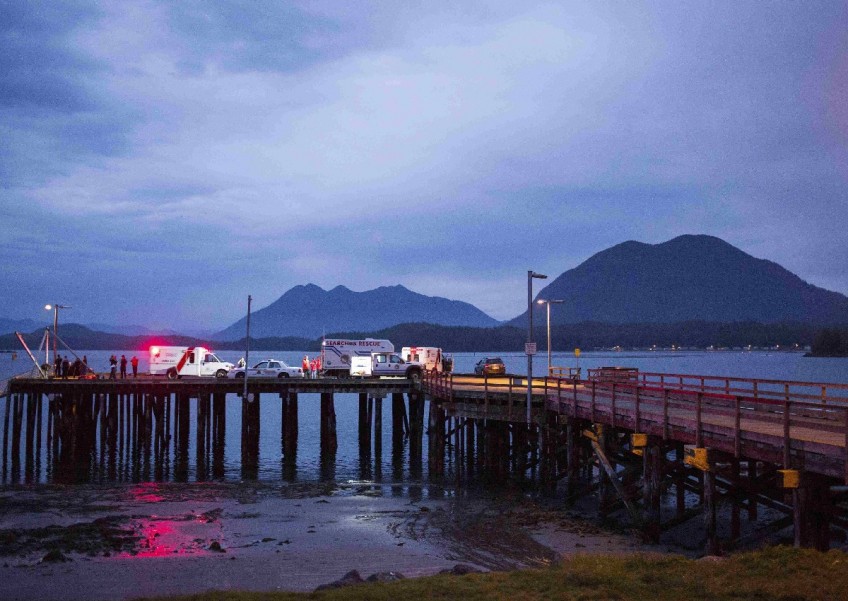 Rescue personnel mounting a search for victims of a capsized whale watching boat park on a wharf in Tofino, British Columbia October 25, 2015.
Reuters

VANCOUVER - Five Britons are confirmed to have died and one person remains missing after a whale-watching boat carrying 27 capsized near Vancouver Island, off Canada's Pacific coast.

Rescuers called off the search early Monday after plucking 21 survivors from the water, Lieutenant Commander Desmond James of the Coast Guard's rescue centre in the provincial capital Victoria, told AFP.

"It is with deep sadness that I can confirm five British nationals have lost their lives when the whale-watching boat they were on sank off western Canada on Sunday," Hammond said in a statement.

"My thoughts are with the family and friends of all those affected by this terrible accident." Eighteen others have been hospitalised, several suffering from hypothermia, according to CBC news.

The Leviathan II was some 12 kilometers (seven miles) off Tofino, a resort town on the western edge of Vancouver Island, when it sent out a distress call to say it was sinking, at around 5 pm (0000 GMT).

Owned by Jamie's Whaling Station and Adventure Centres, the 20-meter (65-foot) cruise vessel was reportedly out on one of its last tours of the season, which ends October 31.

For reasons yet unknown, the ship capsized in waters less than 10 meters (33 feet) deep, its bow remaining visible above water.

Lifejackets, handbags, clothing and other personal effects could be seen floating nearby.

A number of boats converged at the site to help the Coast Guard with its search effort, including vessels from the Ahousat aboriginal community, with one taking eight people aboard, according to an account in the Vancouver Sun newspaper.

"The response here has been nothing short of phenomenal, the way that people are bringing out blankets and clothing and food, donating what they can and offering all of the services that they have," Tofino Mayor Josie Osborne told broadcaster CTV.

"Tofino's thoughts and prayers are with passengers, crew, emergency responders and their families. Thank you all for your messages of support," she wrote on Twitter.

An employee who answered the phone at Jamie's Whaling Station said the company was focused on the passengers and crew.

Tofino is a popular surfing and whale-watching town near the Clayoquot Sound UNESCO Biosphere Reserve.

Jamie's Whaling Station, one of the area's largest tourist boat outfitters, was hit by a deadly tragedy once before in 1998.

According to TSB records, two of the four people aboard a whale-watching ship, Ocean Thunder, died after a "large swell wave struck the boat from the port side."