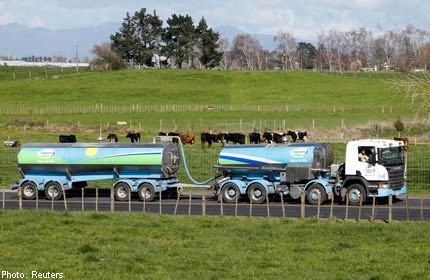 A Fonterra milk tanker drives past fields near Hamilton in this August 6, 2013 file picture.

Fonterra did not provide a reason for Romano's departure, with chief executive Theo Spierings saying only: "Gary has made a significant contribution during his time at Fonterra and we respect his decision."

Romano and Spierings were the public faces of the company as it tried to deal with the fallout in key markets such as China of recalls of Fonterra-related products over concerns they could be tainted with a bacteria that can cause potentially fatal botulism.

While no infants fell sick, Fonterra was accused of mishandling the crisis by releasing information too slowly and then giving out incomplete data when it did finally go public.

Officials from Prime Minister John Key down have made no secret they are unhappy with how Fonterra dealt with a crisis that threatens New Zealand's dairy industry, which is responsible for 25 per cent of the country's exports.

Key has said he will visit Beijing later this year to personally apologise to Chinese customers, who buy about NZ$3.0 billion ($2.4 billion) of New Zealand baby formula a year.

The government has launched an investigation into the crisis, which has been blamed on a dirty pipe at a North island processing plant, while Fonterra is carrying out its own inquiry.

Critics have accused it of failing to learn the lessons of a 2008 scandal, when six children died and 300,000 fell ill after a Chinese company it part-owned illegally laced milk with the chemical melamine