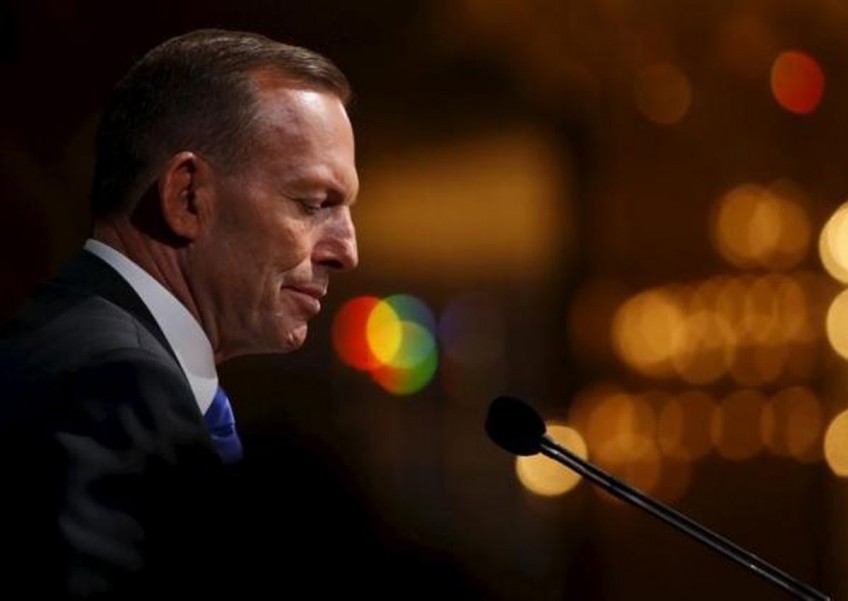 Australia's Prime Minister Tony Abbott delivers a lecture on ''Our Common Challenges: Strengthening Security in the Region'' in Singapore in this file photo taken on June 29, 2015.
Reuters

SYDNEY - Former Australian leader Tony Abbott said he will pay for a marble table damaged during a reported "wild party" in parliament after he was deposed as Prime Minister.

Abbott, who was ousted by Malcolm Turnbull in a late-night Liberal party coup on September 14, admitted he hosted drinks with staff and colleagues in a cabinet room in Canberra following the leadership challenge.

"During this event, a coffee table was damaged," he said in a statement late Monday (Oct 19) after the incident surfaced during a parliamentary hearing, adding that he had asked to be sent the bill. "It was my event so I take responsibility for it."

An email written by parliamentary officials and released during a Senate estimates hearing on Monday said there were accounts that the "marble table ... may have been damaged by a person standing or dancing upon it".

"Anecdotally, we have been advised that pieces of the tabletop were present on the floor Tuesday (Sep 15) morning and more pieces have since been seen in ministerial offices."

Abbott's Liberal Party supporters denied reports the drinks gathering turned into a "wild party" and that people danced on the table, which parliamentary officials said cost A$590 (US$428) when it was purchased in the 1980s.

The Herald Sun reported in the days afterwards that the drinks stretched into the early hours of the morning, with Abbott even briefly dancing with his shirt off. The newspaper said staffers kept some of the broken marble pieces as souvenirs.

Then-assistant infrastructure minister Jamie Briggs, who is now minister for cities, was forced to take to Twitter the day after the soiree to deny he was in a wheelchair after being injured after falling off the table.

Australia's recent string of prime ministers - five in five years - are no strangers to partying after they lose their jobs, according to reports.

Former leader Kevin Rudd was reportedly thrown into a pool, fully clothed, by his staff at his official Canberra residence in the middle of winter after being removed by his deputy Julia Gillard in a Labor party coup in 2010.