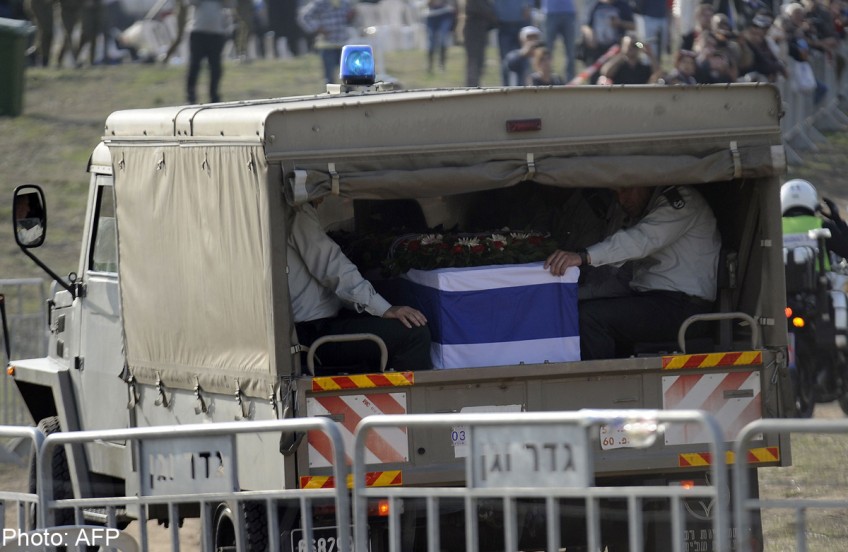 The convoy carrying the coffin of former Israeli prime minister Ariel Sharon's arrives at the burial site where his second wife Lily is buried, on January 13, 2014 at the family ranch Havat Shikmin, near the Israeli city of Sderot in the southern Negev desert.

Sharon died on Saturday after spending eight years in a coma that struck him at the height of a decades-long career which saw him lauded as a military hero and statesman, but also reviled as a warmongering criminal. He was 85.

Eight military generals carried Sharon's coffin to the grave alongside that of his second wife, as a Jewish cantor intoned a traditional prayer for the dead.

Removing the blue and white Israeli flag draped over it, the generals lowered the coffin into the ground, then began filling the grave with dirt.

In accordance with tradition, a military rabbi went up to Sharon's two sons and made a symbolic cut in each of their shirts as a sign of mourning.

"Arik, the commander. You had many titles over the years, but I think this is the one that suited you most," said Chief of Staff Lieutenant General Benny Gantz at the graveside, using the Sharon's nickname.

Sharon, who was born into a farming community north of Tel Aviv in 1928, had wanted to be buried at his family home in Sycamore Ranch which lies just kilometres (miles) from the border with the Hamas-run Gaza Strip.