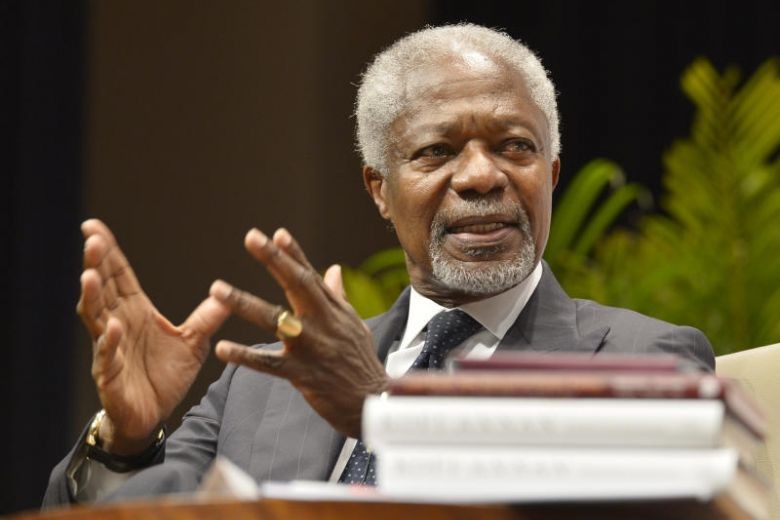 Former UN chief and Nobel peace laureate Kofi Annan died Saturday at the age of 80, prompting a barrage of tributes and condolences from around the world for the "diplomatic rock star".

The Ghanaian national, who lived in Switzerland, was a career diplomat who projected quiet charisma and was widely credited for raising the world body's profile in global politics during his two terms as UN chief from 1997 to 2006.

The first secretary general from sub-Saharan Africa, Annan led the UN through the divisive years of the Iraq war and was later accused of corruption in the oil-for-food scandal, one of the most trying times of his tenure.

"It is with immense sadness that the Annan family and the Kofi Annan Foundation announce that Kofi Annan, former Secretary General of the United Nations and Nobel Peace Laureate, passed away peacefully on Saturday 18th August after a short illness," the foundation said in a statement.

"His wife Nane and their children Ama, Kojo and Nina were by his side during his last days."

Annan, who lived in Vaud Canton, not far from the UN European headquarters in Geneva, died in hospital in the German-speaking part of the country, Swiss news agency ATS reported.

The tributes began pouring in immediately.

"In many ways, Kofi Annan was the United Nations," he said.

"He rose through the ranks to lead the organisation into the new millennium with matchless dignity and determination."

UN High Commissioner for Human Rights Zeid Ra'ad Al Hussein said Annan was "a friend to thousands and a leader of millions".

"Kofi was humanity's best example, the epitome, of human decency and grace," he said.

The United Nations said it would fly flags at half mast at all of its locations around the world through Tuesday.

And Ghana's President Nana Akufo-Addo announced a week of mourning for "one of our greatest compatriots".

In 2001, as the world was reeling from the September 11 attacks in the United States, Annan was awarded the Nobel Peace Prize jointly with the world body "for their work for a better organised and more peaceful world".

Another Nobel laureate, retired South African archbishop Desmond Tutu, described Annan as "an outstanding human being who represented our continent and the world with enormous graciousness, integrity and distinction."

Born in Kumasi, the capital city of Ghana's Ashanti region, Annan devoted four decades of his working life to the UN and was the first chief to rise from within the organisation's ranks.

In 1993, he took over as peacekeeping chief -- a position he held through two of the UN's darkest chapters: the Rwandan genocide and the Bosnian war.

His tenure as UN chief was tarnished by a 2005 investigation of Annan and his son over the oil-for-food scandal, seen by some as payback for his comments that the 2003 US-led invasion of Iraq was "illegal".

An inquiry cleared Annan of any serious wrongdoing, but found ethical and management lapses linked to his son Kojo's ties with a Swiss firm that won lucrative contracts in the oil-for-food scheme.

Annan later admitted that the scandal had sorely tested his mettle not only as secretary-general, but as a father.

Despite the lows, he left the post as one of the most popular UN leaders ever, and was widely considered a "diplomatic rock star" in international diplomatic circles.

After ending his second term as UN chief, he kept up his diplomatic work, taking high-profile mediation roles in Kenya and in Syria, and more recently leading an advisory commission in Myanmar on the crisis in Rakhine state.

He enjoyed some success in ending post-election turmoil in Kenya in 2007, and on Saturday the two main players in that crisis, former president Mwai Kibaki and his opposition rival Raila Odinga celebrated his efforts.

Odinga hailed "what became known as 'the Annan Doctrine' in which he made it clear that the need to respect sovereignty cannot be used as a shield by governments to brutalise their own citizens and that the international community has a right to intervene".

However Annan resigned from the peace mission for Syria in 2012, saying a Security Council stalemate had turned it into a "mission impossible".

He later set up his foundation devoted to conflict resolution and joined the Elders group of statesmen which speaks out on global issues.

World leaders rushed to express their admiration for Annan.

Russian President Vladimir Putin hailed his "wisdom and courage", while German Chancellor Angela Merkel celebrated the "exceptional statesman in the service of the global community."

British Prime Minister Theresa May meanwhile said he was "a great leader and reformer of the UN, (who) made a huge contribution to making the world he has left a better place than the one he was born into."

And NATO chief Jens Stoltenberg said "Annan showed that one can be a great humanitarian and a strong leader at the same time."

"The UN and the world have lost one of their giants."