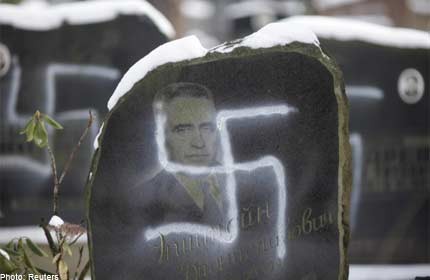 SALON-LA-TOUR, France - A Norwegian neo-Nazi black metal musician and convicted killer was arrested in France on Tuesday over fears he may have been preparing a "major terrorist act", the interior ministry said.

Intelligence officers arrested 40-year-old Kristian Vikernes at dawn at his home in a village in the central Correze region, along with his French wife Marie Cachet, 25.

The ministry said Vikernes was "close to the neo-Nazi movement" and could have been preparing a "major terrorist act".

Norwegian mass murderer Anders Behring Breivik had sent him the manifesto he published online just before he started his killing spree on July 22, 2011, said the ministry.

Interior Minister Manuel Valls conceded that they had as yet identified "no target, no plan" but intelligence chiefs had decided it was important "to act before and not afterwards".

Vikernes is a black metal musician notorious in Norway for having stabbed to death a fellow musician in 1993.

He was sentenced to 21 years in prison for the murder of Oeystein Aarseth, known as Euronymous, who was the guitarist in their group, Mayhem.

Musicians and fans of black metal - an extreme sub-genre of heavy metal - often express anti-Christian views and were involved in the burning of more than 50 churches in Norway between 1992 and 1996.

Released after serving 16 years for the killing, he eventually settled in France in 2010. Police arrested him Tuesday in the village of Salon-la-Tour.

"The stay in prison probably made me a little more extreme, in every way," he said in a 2010 interview with the magazine Guitar World.

That same year on his blog, he called on people to vote for Marine Le Pen, the leader of France's far-right National Front party.

Vikernes, who also goes by the name "Varg", Norwegian for "wolf", had been under surveillance for several years.

But anti-terrorism authorities in Paris opened a probe into the father-of-three at the beginning of the month after his wife purchased weapons - albeit legally as she has a permit.

Explaining the decision to arrest Vikernes, Valls said: "The DCRI (French domestic intelligence service) considered that messages he had posted on the Internet expressed huge violence."

"The purchase of weapons and cartridges by his wife showed that a terrorist plan was possible. To know more, to know what this plan could be... the DCRI considered it was important to arrest and question him."

In a statement on the interior ministry website Valls said Breivik had sent Vikernes his extremist manifesto shortly before killing 77 people in two separate attacks in Oslo.

Breivik, who said the massacre was a protest against multiculturalism, is being held in isolation in a high-security Norwegian prison.

He was sentenced last August to Norway's maximum sentence of 21 years in prison, which can be extended indefinitely if he is deemed to continue to pose a threat to society.

The second anniversary of Breivik's murders falls next Monday.

The mayor of Salon-la-Tour told AFP that Vikernes had a year ago settled with his family in a rented house, away from the village.

Jean-Claude Chauffour said the couple met several years ago when Cachet was graduating from high school.

"He doesn't speak French very well," Chauffour said, adding that the family had three children and Cachet was pregnant with her fourth. It is unclear whether all the children are the musician's.

The young woman's mother appears to have taken care of their children, who did not go to school, the mayor said.

One neighbour of the couple, Yves Langoile, told AFP that Vikernes was "polite" and "appeared to be normal and nice", and close to his children.