PARIS - French President Emmanuel Macron will lead a national ceremony on Wednesday (March 28) honouring a heroic policeman who died offering himself as a hostage in a militant attack.

Lieutenant-Colonel Arnaud Beltrame, 44, was the fourth and final victim in the shooting spree last Friday in the southwestern towns of Carcassonne and nearby Trebes.

"In giving his life to bring to an end the deadly actions of a jihadist terrorist, he died a hero," Macron said ahead of the ceremony.

The senior policeman had taken the place of a woman held as a final hostage in a supermarket by 25-year-old gunman Radouane Lakdim, who pledged allegiance to the Islamic State in Iraq and Syria (ISIS) group.

France has lost more than 240 lives to Islamic militants over the past three years, and the attack is the country's worst since Macron became president last May.

Around 200 of Beltrame's colleagues from the gendarmerie, a national police force which is part of the military, will attend the ceremony in Paris from 6.30pm Singapore time.

Macron will give the eulogy at Les Invalides, a historic complex that is home to France's army museum and a veterans' retirement centre. 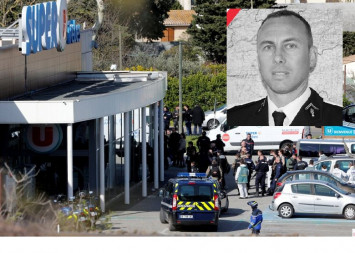 Across the country, police stations will pause for a minute's silence at 4pm Singapore time.

The coffin of Beltrame, who was married, was flown in from Carcassonne on Tuesday, draped in the French flag with his military cap laid upon it.

Along with the police officer, Lakdim shot dead the passenger of a car he hijacked in Carcassonne and two people in the supermarket he had besieged in Trebes.

Beltrame took the place of the woman Lakdim was using as a human shield, hoping to negotiate once the terrified shoppers and supermarket staff were out of the way.

But Lakdim shot Beltrame and slit his throat, leading police to intervene and shoot the attacker dead.

The attacker wounded four other people, including the driver of the hijacked car and a policeman shot while out jogging.

Beltrame has been hailed as a national hero, with family members saying it was typical of him to put others first.

"You behaved in your last moments just as you behaved throughout your whole life: as a patriot, as a good man, as a man with a big heart," his brother Damien wrote on Facebook.

Macron's government has, meanwhile, come under criticism from rightwing opponents who allege that the attack could have been prevented.

Lakdim, who had previous convictions for drug use and handling a banned weapon, had been on a list of suspected extremists since 2014 and was being monitored.

A police source told Agence France-Presse (AFP) that Lakdim had been summoned by anti-terror police for questioning earlier this month.

Far-right leader Marine Le Pen accused the government of exploiting the grief over Beltrame to "escape from its own incompetence and cowardice" in failing to tackle Islamic extremism.

Prime Minister Edouard Philippe hit back at the criticism on Tuesday.

"Those who say ignorantly that this attack could have been avoided, those who promise people zero risk - I say to them, these people bear a heavy responsibility in speaking so casually," Philippe told parliament.

He rejected rightwing proposals to impose an outright ban on ultraconservative Salafist Islam or "pre-emptively" detain the most radicalised Islamists.