France goes to polls with National Front in ascendancy 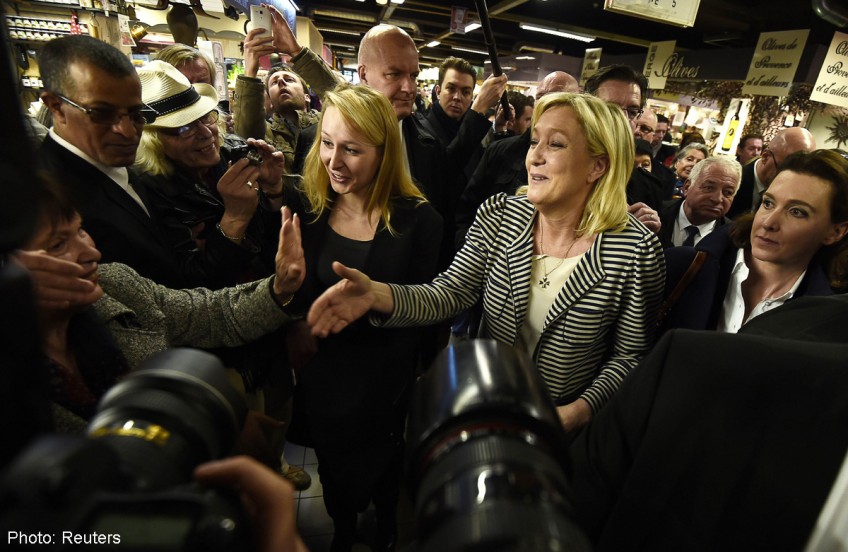 The president of the far-right National Front (FN) party, Marine Le Pen (R), works the crowd on March 17, 2015 with FN Vaucluse deputy Marion Marechal Le Pen (L) at the market in the southern French city of Avignon where she came to support the campaign of Vaucluse department FN candidates ahead of the March 22 and 29 departemental local elections.

Voting began on Sunday in the first round of French local elections where the anti-immigration National Front (FN) hopes to come top and consolidate leader Marine Le Pen's bid for the presidency in 2017.

Opinion polls suggest voters are unexcited about the election for councillors with limited powers in the"departements", one stratum of France's complex local administration which President Francois Hollande has in any case promised to overhaul.

But it is a measure of the fear Le Pen's far-right party has struck among France's political elite that Hollande, his ministers and their mainstream conservative rivals have all been touring the country with last-minute appeals to voters.

The FN, which wants a return to the French franc and a referendum on capital punishment, surfed a wave of disenchantment with established politicians to emerge top in last year's European Parliament elections and won control of a dozen city halls in a separate ballot.

Surveys have put it and the opposition UMP neck-and-neck to win close to a third each of Sunday's vote, with Hollande's Socialists trailing. A Harris Interactive opinion poll for France's parliamentary TV channel released on Friday put the FN on 29 per cent, the UMP on 28, and the Socialists on 19.

The two-round nature of the ballot means the FN will win control in only a handful of departements in second-round run-offs due on March 29, as many UMP and Socialist voters will switch allegiance to whatever party can keep it out of power.

About 53 per cent of voters will not take part, according to an Ifop poll for Paris Match, iTele and Sud Radio that was published on Friday, only 3 points lower than the stay-away recorded at this electoral level the last time around in 2011.