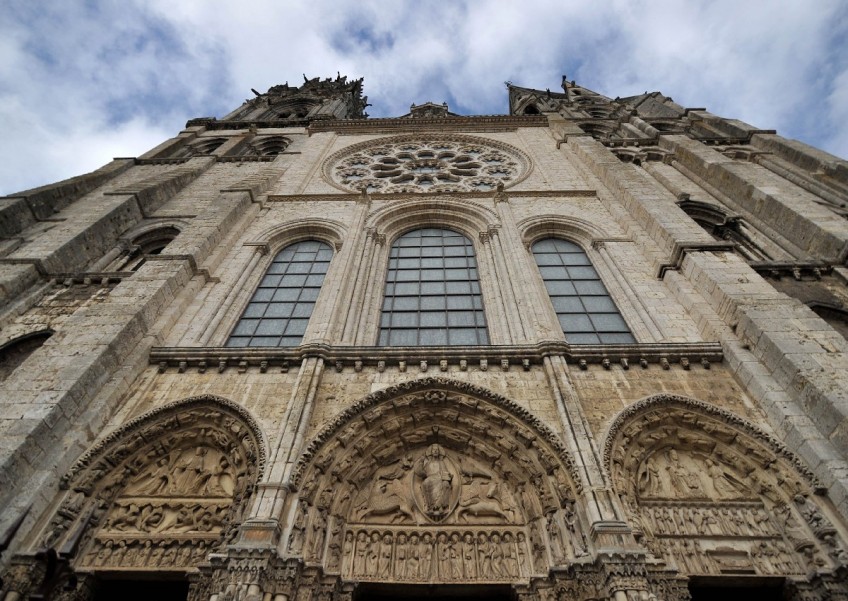 A picture taken on September 15, 2015 shows the western facade of Chartres Cathedral during renovation work. Chartres Cathedral, built between 1194 and 1250, was been declared a UNESCO World Heritage Site in 1979.
AFP

CHARTRES, France - An unholy row has broken out over the restoration of France's medieval landmark, Chartres Cathedral.

State-funded work to return the interior of the towering 13th-century cathedral to its original creamy white hues has sparked a howl of protest from as far away as the US.

Even the discovery of original decor has failed to placate shocked architecture lovers across the Atlantic who have slammed the makeover as "irresponsible".

The UNESCO World Heritage listed masterpiece, renowned for its blue stained-glass windows, is one of Europe's best preserved churches and a magnet for pilgrims and architecture lovers.

But "the notion that we can recreate the exact quality of the building when it was new by such artificial means is as wrongheaded as an ageing actress thinking she can recapture her lost youth by having a facelift," said US architecture specialist Martin Filler He feels so strongly that he took to the pages of the prestigious New York Review of Books in late 2014 to vent his anger.

Launched in 2008, the project aims to restore the cathedral to its full former glory at the time of its consecration from under the age-old layers of soot and dust that had given it its more familiar blackened appearance.

Fake stones on sidings, mainly coloured in pale ochre, and columns and arches highlighted in white have come to light as the cleaning has progressed.

Restorers have even discovered a trace of the 1789 French Revolution with the words "republic" and "constitution" written in the soaring nave area of the cathedral, 80 kilometres (50 miles) southwest of Paris.

Filler said he was mostly "shocked" by the organisers' disregard for established guidelines.

"What is most shocking about the changes at Chartres is that they completely ignore the universally accepted guidelines established by the Charter of Venice more than 50 years ago, " he complained in an interview with AFP by email.

Their most important principles, he continued, are that "no harm be done to a landmark in its restoration and that all changes must be reversible".

"Although the interiors of Chartres were initially lighter, they have not been seen in that condition for many centuries," Filler said.

Another US-based critic and Gothic art fan, Stefan Evans, has initiated an online petition which has gathered several hundred names.

"Irresponsible restoration is erasing history from the Gothic masterpiece," it says, complaining that historically inaccurate paint and filling material was being used in a setting with 800 year-old windows and floors.

Evans, a physics PhD student at Arizona University, said it had been "heartbreaking" to see the transformation inside the cathedral during a visit to Chartres earlier this year.

But France's state authorities for culture, who are carrying out and funding the 20-million-euro ($23 million) restoration, say they have not been directly contacted by the critics and are only aware of their arguments via press reports.

"We don't wish to enter into the debate," the regional management of cultural affairs told AFP, adding that all the restoration works had been thought out by a number of experts.

"We didn't act on a whim," it stressed, inviting naysayers to come and see for themselves what has been done.

The cathedral in the form it is in today, including the wall paintings, was built in a just-over 30 year period, ending in 1225.

Restoration work is focused on two choir chapels. "Seven spans and 14 bay windows are in the process of being restored, of which the first part is just finished," engineer Daniel Alazard, who is working on the project, told AFP.

The nave's overhaul is expected to be finished at the end of next year while the transept is also lined up for restoration.

And the cathedral's famous blue stained-glass windows are also on the agenda.

"The glass panes are dirty on the inside due to pollution and smoke but also due to patinas applied during restorations in the 19th century," Alazard said.

"We have great difficulty in removing them to make them really transparent again."