Freedom is a bike for migrants crossing Arctic border 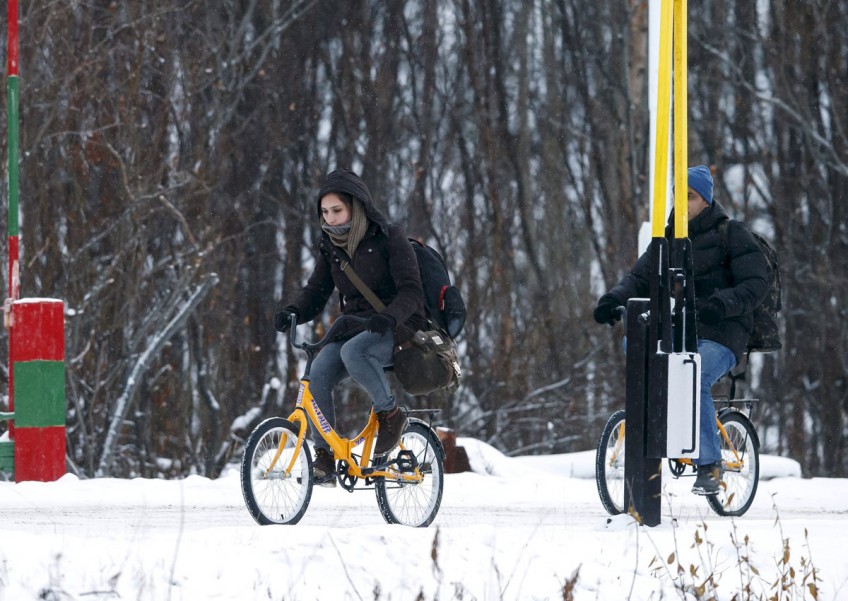 NORWAY - Pedalling a bicycle through a freezing blizzard, Rehman finally crosses the border between Russia and Norway where he hopes to be given asylum, half a world away from his home in Pakistan.

"It's snowing. It's slippery and very cold, and very hard because some people don't know how to bike," says the strapping and affable 34-year-old, exhausted but relieved to have reached the end of his long odyssey.

While hundreds of thousands of people fleeing war, persecution and misery are crossing the Mediterranean in unseaworthy dinghies, each day about 100 people are opting for the longer, but usually safer, "Arctic route", the northern European gateway to the Schengen zone.

The last stretch of the journey must be completed by bicycle because Russian authorities do not let pedestrians cross the border and Norway considers it human trafficking to transport migrants in a vehicle.

"I checked on the Internet and saw that Norway has an open border," says Hichem, a 24-year-old Tunisian, echoing a widely held belief that the Scandinavian country is trying to quash.

With a 15-day Russian tourist visa, Hichem flew from Tunisia to Moscow and then boarded a train to Murmansk, before hopping in a taxi to Nikel, a small town near the Norwegian border 185 kilometres (115 miles) away.

The only land entry point between Russia and Norway, the small Storskog border crossing is 400 kilometres north of the Arctic Circle.

Wooded snow-covered valleys, frozen lakes, starry night skies lit up by the greenish flames of the Northern Lights: the pristine nature here resembles something out of a fairytale but its tranquility can be unsettling for the unaccustomed.

But it doesn't seem to put off refugees - not even the subzero temperatures.

More than 5,000 migrants have crossed the border since the beginning of the year, compared with only 10 in 2014.

"There's way too much snow," complains Hichem, jumping up and down quickly to keep warm as the mercury hits -15 Celsius (5 Fahrenheit) outside the former military barracks that now house the newly arrived refugees.

Shivering and rosy-cheeked, with their shoulders pressed up around their ears, groups of refugees arrive every day, usually in clusters of five or six at a time.

Some carry suitcases and push their bikes across the border. Others bravely pedal down the snowy road, not stopping until they reach their goal. A young mother clutches the handlebar of her bike tightly with one hand, struggling to carry her infant bundled up in a snowsuit in the other.

Wearing jeans and down jackets, many refugees have just sneakers on their feet - a sharp contrast to the big fur-lined boots worn by locals.

In the refugee centre where they are transferred, they are given a kit more appropriate for the colder climate: a warm coat, ski pants, a hat and gloves.

Inside the centre, the furnishings are spartan in order to make as much space as possible for bunk beds.

Rehman stayed in Russia for almost a year on a student visa. Annoyed by the corruption he saw everywhere, he decided to leave for Norway.

Getting off the train in Murmansk, "police caught us and they said 'Give us your money if you want to go to Norway'. I said 'Why give you money, we don't have money! We're going to Norway because we have problems'," he recalls, puffing on a cigarette.

He is however one of many who risk being sent back to Russia.

Norwegian authorities have said they want to send back to Russia those who have been granted residency or a visa there, arguing that it is a safe country for them.

Mounir, a 50-year-old Tunisian, also made the heart-wrenching decision to leave his restive homeland.

In Kirkenes, he may be freezing cold but he feels free. The cold - and the darkness that falls in mid-afternoon at this time of year - don't bother him.

He hopes to stay in Norway and bring over his wife and the rest of his family.

"It's very expensive for those who arrive here after a long journey, who have no money and are looking for a safe haven," he railed.

"One of us had to stay behind because he didn't have enough money."