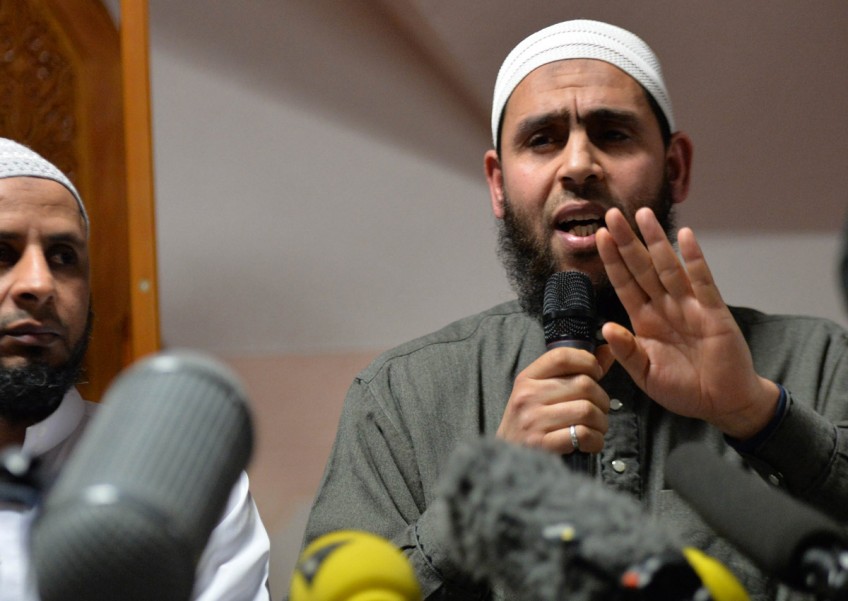 Moroccan imam Ibrahim Elghoul (R) next to Abdallah Benali (L), president of the association Generation 2000 Mosque of Luce answers to journalists during a press conference on November 15, 2015 at the mosque of Luce, near Chartres, centre France . The mosque was frequented by Omar Ismael Mostefai, one of the suicide bombers who took part in the attack on the Bataclan theatre in Paris on November 13.
AFP

PARIS - Mosques across France held their weekly services on Friday in the shadow of last week's Paris massacre by Islamist militants, with sermons rejecting violence and asking how some radical French Muslims could support it.

Before dawn, the government's announced crackdown on radical preachers led to a search of a mosque in the west coast city of Brest, known for its imam's hardline views, but police found no evidence of anything illegal.

The Grand Mosque of Paris called off a planned rally against terrorism there, due to be held after midday prayers and attended by the city's mayor Anne Hidalgo, because police said they could not assure its security.

In an unusual step, the French Council of the Muslim Faith (CFCM) - the main umbrella group for mosque associations - and several of its member groups urged their imams to denounce the attacks in their sermons and distributed suggested texts.

Militants from the Islamic State movement, most of them French or Belgian nationals, killed 129 people on Friday evening. France's five million-strong Muslim minority is the largest in Europe and about eight per cent of the population.

"These criminal acts were perpetrated by children of France who claim to follow Islam and consider themselves martyrs in a jihadist enterprise," said the "khutba" (sermon) in French distributed by the CFCM to be read in all affiliated mosques.

"We must never tire of saying and repeating that authentic Islam is light years away from the hateful ideology of these terrorist criminals," it said.

"They are the 'khawarij' of modern times," it added, comparing the killers to violent extremists in early Islam who fought against the faith's recognised leaders.

The CFCM sermon said French Muslims "proclaim our full support for the values of the Republic" and prayed to God "to preserve and bless France".

"GOOD WILL IS NOT ENOUGH"

Texts distributed by CFCM member organisations included both religious arguments against violence, backed up by quotes from the Quran, and discussions of problems facing French Muslims.

Rejecting the simple response that the killers were not genuine Muslims, the text for imams in Lyon said: "Good will is not enough, nor are nice speeches."

Imams had to understand modern French society and interpret the Quran to make it relevant to today's Muslims, it said, and theologians must do more to refute Islamic State's ideology.

The government must also help French Muslims by supporting higher education for imams and hiring more Islamic chaplains for prisons, it added.

The Union of French Mosques, a network mostly for believers of Moroccan origin, said French Muslims should hold rallies and meetings with other faiths to counter Islamic State's efforts "to find among the French support for their lost cause".

The mosque search in Brest, on the far northwestern tip of France, followed a pledge by the government to shut down mosques that preach hate.

The mosque's imam, Rachid Abou Houdeyfa, has gained notoriety for videos of his sermons on YouTube, including one where he tells children that music is forbidden and those who listen to it will be "turned into monkeys and pigs".

Several dozen police on the search found nothing illegal and nobody was interrogated, local officials said.

The search illustrated the difficulties officials will have tracking radical preachers because some espouse what mainstream Muslims would consider extreme religious views but reject violence. Houdeyfa has publicly denounced the Paris massacre.

"The search was conducted ... in a full respect of the place of worship and without any incident", Houdeyfa said in a statement.

French media have reported mosque searches in several other locations, including in the Paris and Lyon areas, as police use their powers under the state of emergency to check on local congregations.

[[nid:238893]]
SUBSCRIBE TO OUR NEWSLETTER
Your daily good stuff - AsiaOne stories delivered straight to your inbox