French President sets out fightback against IS after Paris attacks 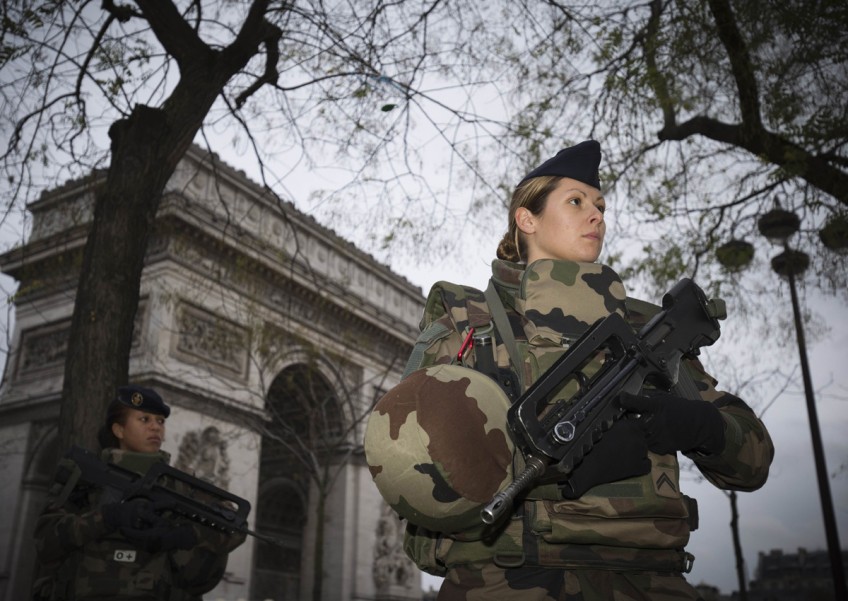 France and Belgium staged dozens of raids on suspected extremists as the manhunt continued for an eighth jihadist, including in a known radical hotspot in Brussels where some of the attackers are thought to have lived.

Describing the coordinated attacks that killed 129 people as "acts of war," Hollande urged a global fightback to crush IS and said he would hold talks with his US and Russian counterparts on a new offensive.

Friday's "acts of war... were decided and planned in Syria, prepared and organised in Belgium (and) perpetrated on our soil with French complicity," Hollande told an extraordinary meeting of both houses of parliament in Versailles.

"The need to destroy Daesh (IS) ... concerns the entire international community," he told lawmakers, who burst into an emotional rendition of the La Marseillaise national anthem after his speech - only the second time in more than 150 years a French president has addressed a joint session of parliament.

On the domestic front, Hollande called for an extension of the state of emergency by three months and announced 8,500 new police and judicial jobs to help counter terrorism.

A government source told AFP that those returning from Syria could be placed under house arrest and said the presidency was considering amending the constitution to allow for tougher security measures.

With emotions running high, thousands paused in the streets of Paris for a minute's silence to remember those killed at nightspots and at the national stadium in the worst-ever attack on French soil.

Investigators identified two more extremists involved in the assault, including a Frenchman previously charged with planning a terror attack and a suicide bomber found with a Syrian passport, which has yet to be authenticated.

Russia's President Vladimir Putin, speaking at a G20 conference in Turkey, said the attacks proved the need for an international anti-terror coalition.

"I spoke about this at the United Nations... and the tragic events that followed have confirmed that we were right," he said.

US President Barack Obama, also in Turkey, said a new deal had been agreed with France to speed up intelligence-sharing.

His secretary of state, John Kerry, landed in Paris late on Monday to discuss the attacks and described IS as "psychopathic monsters".

During pre-dawn raids in the southeastern French city of Lyon, police found "an arsenal of weapons," including a rocket launcher and Kalashnikov assault rifle.

As authorities scrambled to find those responsible, the grieving French tried to return to the humdrum of daily life.

Mountains of flowers and candles have been laid at the scenes of the attacks and in front of businesses that lost loved ones.

"We need to understand how this barbarism can exist and why France is paying this heavy price," said David Boy, a 52-year-old advertising agency boss, his lips trembling as he lingered at one of the memorials on his way to work.

Metro trains were packed with commuters, pupils returned to schools and museums reopened, although a national state of emergency remained in place.

A social media campaign urged everyone to visit cafes and bars on Tuesday night.

In the face of "barbarism... culture is our biggest shield and our artists our best weapon," said Culture Minister Fleur Pellerin.

Prime Minister Manuel Valls steeled the nation for more bloodshed, telling RTL radio that more operations "are still being prepared, not only against France but other European countries too".

Late on Sunday, French planes bombed the stronghold of IS jihadists in northern Syria.

French jets hit an IS command post, a recruitment centre, a munitions depot and a training camp in Raqa, the jihadists' de facto Syrian capital, and more raids were reported Monday.

The manhunt continued for 26-year-old Salah Abdeslam, one of three brothers linked to the attacks.

One brother blew himself up in the Bataclan concert venue and was identified from a severed finger, while the third was arrested in Belgium but released without charge.

The brothers lived in the rundown Brussels neighbourhood of Molenbeek, which has a reputation as a hotbed of Islamic militancy and where police have made several arrests.

Abdelhamid Abaaoud, 28, a Belgian of Moroccan descent also from Molenbeek and thought to be fighting for IS in Syria, is considered a possible mastermind of the attacks.

Five of seven known attackers have been identified, but it is unclear if other gunmen fled after the carnage.

Two of the gunmen behind the bloodbath at the Bataclan, where 89 people were killed, have been identified as 29-year-old Paris native Omar Ismail Mostefai and 28-year-old Samy Amimour. Both detonated suicide bombs.

A Turkish official said its police had twice warned France about Mostefai, who was one of 10,000 people tagged by French intelligence as an extremist.

Amimour was charged in France in 2012 for "conspiracy to commit terrorism" over an attempt to travel to Yemen and was wanted on a global arrest warrant after violating the terms of his judicial supervision.

There are fears some of the assailants entered Europe as part of the huge influx of people fleeing Syria's civil war, after a Syrian passport was found near the body of one suicide bomber at the Stade de France in the name of Ahmad Al Mohammad.

The document has yet to be verified and Serbia detained a migrant on Monday whose passport contained the same data.

The attacks came less than 11 months after jihadists struck the Paris offices of satirical magazine Charlie Hebdo and a Jewish supermarket, killing 17.