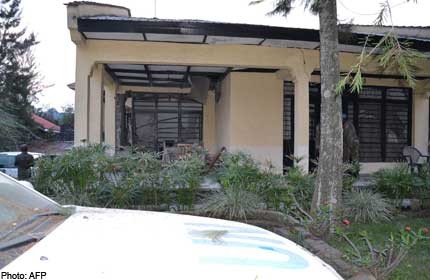 A UN car is parked in front a damaged house where an official of the United Nations lived, after shells were fired as clashes between M23 rebels and government forces continued in Goma.

GOMA - Shelling killed two people Saturday in Goma in the restive east of DR Congo after a newly formed UN brigade took its first military action to back government troops and prevent rebels from entering the mining hub, witnesses said.

Three UN peacekeepers were wounded by shells that landed near their positions, the UN mission MONUSCO said, charging that they had been targeted by the rebels.

It was unclear who fired the deadly shell that smashed into Goma's western neighbourhood of Ndosho, sparking an angry reaction from residents who blocked access to vehicles, witnesses said.

"A shell has just landed on my neighbourhood," Ndosho resident Charles Paluku told AFP on the phone, adding that two people had been reported dead.

Another witness speaking on condition of anonymity provided the same death toll.

UN envoy to the African Great Lakes region Mary Robinson condemned the violence, saying in a statement: "The attacks on the town of Goma as well as on MONUSCO forces, and their tragic consequences on the civilian population already traumatised by two decades of conflict, are unacceptable."

She added: "We must do everything to avoid an escalation of tension in the region."

State Department deputy spokeswoman Marie Harf said the US was "alarmed" by the escalating fighting between the army and M23 rebels.

"We condemn the actions of the M23, which have resulted in civilian casualties, attacks on the UN peacekeeping mission (MONUSCO) and significant population displacements," Harf said in a statement, also expressing concern over reports the M23 rebel movement had fired into Rwandan territory.

"We call on the M23 to immediately end the hostilities, lay down their arms, and disband, in accordance with UN Security Council resolutions."

"Attacks against UN installations and personnel are unacceptable," she said.

UN mission chief Martin Kobler warned after the Ndosho incident that attacks "against the civilian population will not go unpunished".

Kobler, who has been in Goma since Friday, condemned the "indiscriminate and unacceptable attacks against the civilian population".

"I have ordered the MONUSCO force to react with all necessary energy against these frightful, unspeakable crimes," he said.

"The Congolese government decided to shell the town of Goma causing the deaths of men and creating a climate of despair among residents," he wrote in a document seen by AFP Saturday.

The M23 was founded by former fighters in a Tutsi rebel group whose members were integrated into the regular army under a 2009 peace deal that they claim was never fully implemented.

Several of its leaders have been hit by UN sanctions over alleged atrocities and the world body has accused Rwanda of arming - and even of commanding - the rebels, a claim Kigali denies.

The M23 rebels briefly seized Goma last year and only pulled out following a regionally brokered deal under which they were supposed to remain several miles outside the city.

Fighting has erupted sporadically since mid-July, ending a two-month lull in the violence, and the rebels moved closer to Goma, arguing that Kinshasa was reneging on its pledge to hold direct talks.

The group has threatened to recapture Goma but UN forces, including a 3,000-strong intervention brigade with a robust mandate to eradicate armed groups in the region, have moved in to create a security zone around the city.

Following a fresh deadly bout of fighting that erupted on Wednesday, the UN brigade launched its first military action against the M23, fighting alongside the DR Congo army.

The brigade is made up mainly of troops from southern Africa.

Rwanda, which accused Congolese troops of firing a rocket and mortar shells over the border over the past 48 hours, warned Saturday that it will not stand by "indefinitely".

Eastern DR Congo, which borders Rwanda and Uganda, was the cradle of back-to-back wars that drew in much of the region from 1996 to 2003 and were fought largely over its vast wealth of copper, diamonds, gold and coltan, a key mobile phone component.

The instability there was exacerbated by the aftermath of the Rwandan genocide, when Hutus implicated in the killing of some 800,000 mostly Tutsi victims fled across the border after Tutsi leader Paul Kagame came to power.