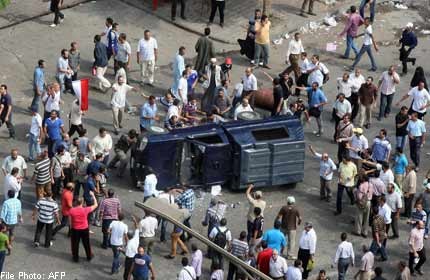 CAIRO - Islamists in Egypt called for a "Friday of anger" in Cairo after a crackdown on protesters that killed nearly 600 people nationwide, as Washington scrapped a joint military exercise in response.

"Anti-coup rallies tomorrow will depart from all mosques of Cairo and head towards Ramsis square after (traditional Friday) prayer in 'Friday of Anger'," Muslim Brotherhood spokesman Gehad al-Haddad wrote on his Twitter account.

There were renewed attacks on security forces during a tense day on Thursday, with at least seven soldiers and a policeman killed in the Sinai peninsula and another police officer killed in the central city of Assuit.

With the country under a state of emergency and many provinces hit by night-time curfews, the interior ministry ordered police to use live fire if government buildings came under attack.

International criticism of the bloodshed poured in and the United Nations Security Council launched emergency consultations on the crisis at the request of France, Britain and Australia.

After the meeting, they called for "maximum restraint."

President Barack Obama led the international outrage at the bloody crackdown, announcing the cancellation of a joint US-Egyptian military exercise.

"While we want to sustain our relationship with Egypt, our traditional cooperation cannot continue as usual when civilians are being killed in the streets and rights are being rolled back," he said.

But despite scrapping the Bright Star exercise, which has been scheduled every two years since 1981, he stopped short of suspending Washington's annual $1.3 billion in aid to Egypt.

Meanwhile, the US State Department warned citizens not to travel to Egypt and called on those already there to leave.

In Europe, governments in multiple capitals summoned Egyptian envoys to voice their concern.

Turkey later Thursday recalled its ambassador to Cairo "to discuss the latest developments."

And UN rights chief Navi Pillay called for "an independent, impartial, effective and credible investigation of the conduct of the security forces."

"The number of people killed or injured, even according to the government's figures, point to an excessive, even extreme use of force against demonstrators," she said.

Morsi supporters had called for Cairo marches on Thursday but that call was not heeded, while small protests were staged in coastal Alexandria and southern Beni Sueif.

Meanwhile, attacks against churches and Christian properties that began on Wednesday continued for a second day, with activists saying at least 25 churches had been targeted.

"We will push forward until we bring down this military coup," he tweeted. In Cairo, at the Al-Iman mosque, dozens of corpses of protesters clad in white shrouds were lined up before grieving relatives.

At the two protest sites where Morsi loyalists had camped since his July 3 ouster, trucks cleared charred debris.

And Egyptian police entered a Cairo mosque containing the bodies of several dozen Islamist protesters after a brief stand-off during which tear gas was fired.

State media said ambulances were waiting to cart the bodies off to hospital for identification.

The statement appeared to be a bid to warn against fresh attacks like those that targeted police stations in Sinai and Assuit, and the Giza governorate building in Cairo.

There were also calls from Tamarod, the protest group that organised opposition to Morsi's rule, for Egyptians to take to the streets on Friday "to reject domestic terrorism and foreign interference."

Despite the bloodshed, Egypt's press welcomed the end of the pro-Morsi demonstrations.

"The nightmare of the Brotherhood is gone," daily Al-Akhbar's front page headline read.

Newspapers carried photos of protesters brandishing weapons and throwing stones, but none from makeshift morgues where dead protesters were lined up in rooms slick with blood.

The killing prompted interim vice president and Nobel laureate Mohamed ElBaradei to resign, saying he was troubled over the loss of life, "particularly as I believe it could have been avoided."

Despite the condemnation, interim prime minister Hazem al-Beblawi praised the police for their "self-restraint" and said the government remained committed to an army-drafted roadmap calling for elections in 2014.

He justified the use of force saying Morsi loyalists had been sowing chaos, "terrorising citizens, attacking public and private property."