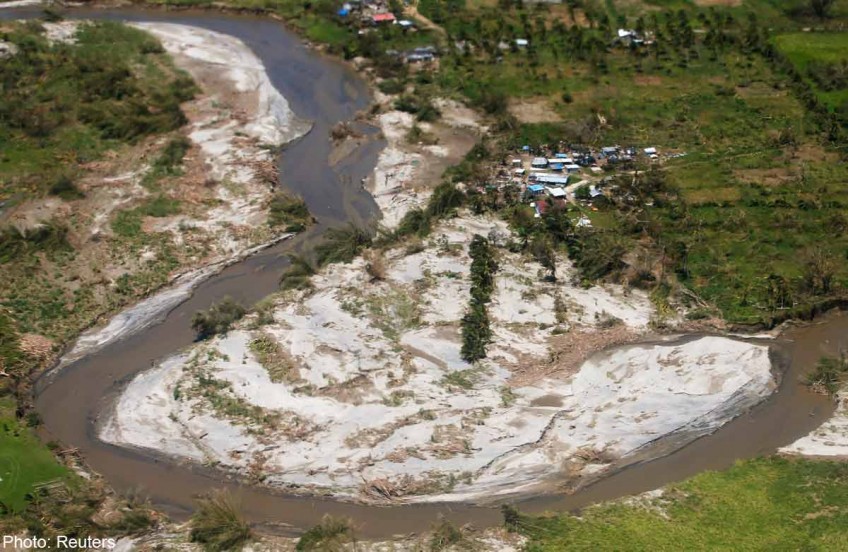 An aerial view of the destruction after Cyclone Pam in Port Vila, capital city of the Pacific island nation of Vanuatu.

PORT VILA - The death toll from Cyclone Pam which devastated Vanuatu rose to 13 Friday, the UN said, as concerns mount about supplies of fresh water across the ravaged Pacific nation.

In a situation report, the world body raised the number of deaths from 11, and said priority needs across the sprawling archipelago, where crops have been destroyed and houses razed, were for potable water, food, shelter and health.

However confusion remains over how many died directly from the storm.

Early reports from the UN Office for the Coordination of Humanitarian Affairs (OCHA) last week announced an unconfirmed 44 dead, which then dropped to 24, and was revised down again to 11.

Late Wednesday, the Vanuatu government said in fact only seven people were confirmed dead and that four others included in the UN toll were patients already in hospitals whose deaths were not directly related to the storm.

A week after the category five tempest slammed ashore, relief agencies Friday were due to finalise an assessment report with a more detailed overview of the situation on the ground, and hand it to the government.

The OCHA said the aim was "to reach a common understanding of the required scale of the response to Cyclone Pam and to target the response in a coordinated manner".

On Wednesday, the Vanuatu government hit out at aid groups swarming the nation over what it perceived to be a lack of coordination, which it said cost precious time getting help to those in need.

Aid groups have been battling logistical challenges in assessing the extent of the damage, with a lack of landing strips and deep water ports hampering their efforts.

The UN said assessments had been completed for 15 islands in the 80-island nation, which found widespread devastation, with the government warning food will run out in the largely subsistence economy within days.

Access to drinkable water is a major worry, with ground water contaminated and a lack of power hindering piped supplies.

Save the Children said communities on some isolated islands faced a perilous situation, with at least 2,000 children at risk of potentially deadly illnesses such as diarrhoea from drinking bad water.

"We are hearing reports that children are contracting water-borne diseases such as diarrhoea and the longer these children have to drink contaminated water, the more likely it is they will become sick," said country director Tom Skirrow.

"Some communities are reporting only having about a week's supply of drinking water left, which could put lives at risk." Aid continues to flood in with a British military aircraft joining the effort along with a French frigate and helicopters, working alongside Australia and New Zealand.

The UN said China had offered tents, food, generators and other supplies, while Japan and Singapore had also mobilised support.

Vanuatu is no stranger to cyclones, which are common in the South Pacific, but locals said Pam felt worse than Cyclone Uma in 1987, which killed 30 people.