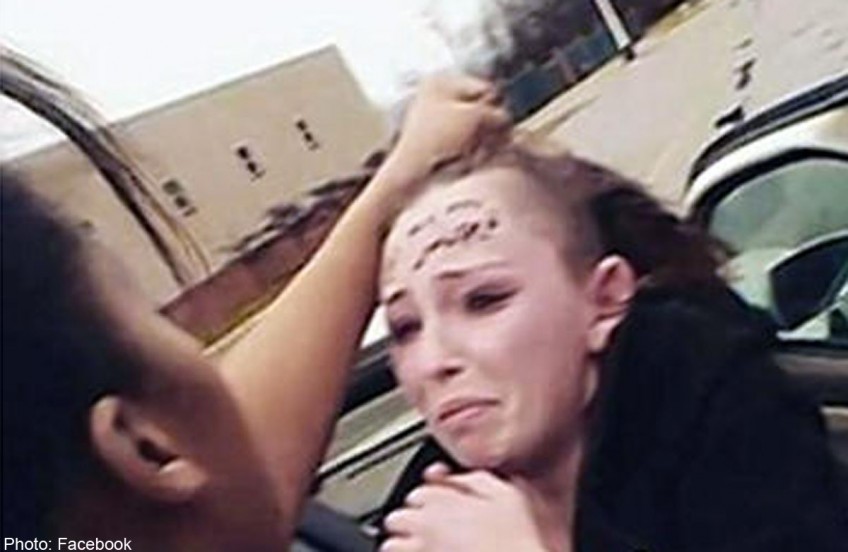 Photos and videos of an American teenager being attacked by a group of women, leaving her with a concussion, went viral on social media.

Ms Cheyanne Willis said she was pulling into a carpark in a suburban Cincinnati mall with her then-boyfriend Quincy Gardner on Christmas Eve when he stopped the vehicle and pulled her out, local TV station WCPO reported.

The 19-year-old said six women, including two whom she knows, approached her and accused her of stealing a car.

They then took turns kicking and beating Ms Willis, and slammed her face on a car bonnet.

Her assailants even wrote "I got my a** whooped" on Ms Willis' forehead with eyeliner and shaved off some of her hair.

In a video of the incident, she is seen pleading and crying, while her assailants shout angrily, the Daily Mail reported.

Ms Willis said they took her purse, mobile phone and destroyed her driver's licence. They also threatened her with death if their actions were reported.

Ms Willis said the incident has taken a heavy emotional toll on her.

She told the Daily Mail: "I am scared to leave my house still. I still haven't been to sleep - I hate to fall asleep because I have nightmares.

"I wanted to just die. I really wish they would have killed me. I don't want to be here no more."

As of Friday, Ms Willis' ex-boyfriend, Gardner, 20, who she said drove her to the mall, had been charged with robbery. Cheyenne Fisher, 21, who was allegedly involved in the attack, was also charged.

Fisher has maintained that Ms Willis had stolen her car and had started the fight by swinging first, but the video does not show this as the filming did not begin until she fought back.

Fisher told WCPO: "I didn't really punch her or anything - I just slapped her and put fear in her heart." The incident remains under investigation.

This article was first published on January 4, 2015.
Get The New Paper for more stories.