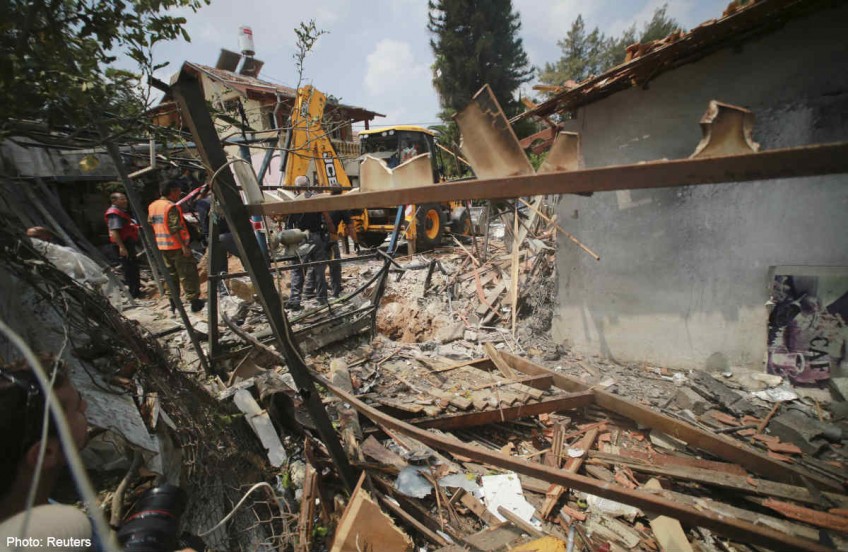 Israeli emergency personnel work at the scene after a rocket, fired by Palestinian militants in Gaza, landed in Yahud near Tel Aviv July 22, 2014.

GAZA CITY, Palestinian Territories - Major airlines blocked flights to Israel Wednesday after a rocket from Gaza struck near airport runways, as the UN chief urged an end to a conflict that has killed 636 Palestinians.

As the violence entered its 16th day, neither Israel or Islamist movement Hamas appeared willing to end hostilities, despite days of diplomatic efforts to coax them into a truce.

UN Secretary-General Ban Ki-moon, on a visit to Tel Aviv, appealed on Tuesday for the bitter rivals to "stop fighting" and "start talking.".

However Israel insisted it would keep up its aerial and ground assault until it smashes cross-border tunnels used by Gaza militants to attack the Jewish state, while Hamas continued to fire rockets.

One crashed a few kilometres (miles) north of Tel Aviv's Ben Gurion international airport prompting the US Federal Aviation Authority to ban commercial flights to and from Israel for at least 24 hours.

And the European Aviation Safety Agency advised all carriers to avoid Tel Aviv "until further notice".

The bans come after Malaysia Airlines flight MH17 was allegedly shot down by a missile over strife-torn eastern Ukraine, heightening sensitivity over aviation safety above warzones.

It was the first time such measures had been taken since the 1990-1991 Gulf war.

"Netanyahu spoke this evening with ... Kerry and asked him to act to restore flights by American airline companies to Israel," sources in Netanyahu's office told AFP.

Kerry said the order would be reviewed within in a day and told Netanyahu the ban was solely due to safety concerns, State Department spokeswoman Jen Psaki said.

Following top-level talks in Cairo, Ban went to Tel Aviv and appealed to both sides to lay down arms.

"Stop fighting, start talking and take on the root causes of the conflict so that we are not at the same situation in the next six months or a year." The UN chief described Hamas rocket fire on Israel as "shocking" and said it must "stop immediately".

But he also said Israel must exercise "maximum restraint" in Gaza, and he urged it to take a hard look at some of the root causes of the conflict "so people will not feel they have to resort to violence as a means of expressing their grievances".

Meanwhile in Cairo, Kerry discussed ceasefire proposals with Egypt's President Abdel Fattah al-Sisi The top US diplomat again placed the onus on Hamas to accept a ceasefire, voicing support for an Egyptian truce initiative as a "framework" to end the fighting.

And a senior Palestinian official said talks were ongoing between president Mahmud Abbas and Hamas for a ceasefire.

Abbas pledged that Israel would be held accountable internationally for Gaza deaths.

"We will pursue all those who commit crimes against our people, however long it takes," he said in televised comments ahead of an emergency meeting of the Palestinian leadership in Ramallah.

An Israeli army spokeswoman told AFP that he had been one of about of about 50 people throwing rocks and petrol bombs at soldiers.

"Initial investigation shows one of the protesters was apparently hit by rubber bullets and died from that," she said, adding that no live rounds were fired.

"UNRWA condemns in the strongest possible terms the shelling of one of its schools in the central area of Gaza which was sheltering hundreds of Palestinians displaced by the current fighting," it said in a statement.

"The location of the school and the fact that it was housing internally displaced persons had been formally communicated to Israel on three separate occasions. We have called on the Israeli authorities to carry out an immediate and comprehensive investigation." During the offensive, more than 100,000 Gazans have fled their homes, seeking shelter in 69 schools run by UNRWA.

Israel has lost 27 soldiers and two civilians to the violence.

The army on Tuesday confirmed the death of a soldier who Hamas militants claimed they had kidnapped, but said his remains were unaccounted for.

Despite its rising body count, Israel said it would only halt its Gaza offensive after laying waste to a sophisticated network of tunnels used by militants for cross-border attacks.

She said Hamas's "completely unacceptable" preconditions for a truce had "no chance of being accepted by anyone".

Hamas has laid out a list of demands for halting its fire, including a lifting of Israel's eight-year blockade on Gaza, the release of dozens of prisoners, and the opening of its Rafah border crossing with Egypt.

The European Union appealed to Israel to keep its military operation in Gaza "proportionate" and for "all sides to implement in good faith an immediate ceasefire," a statement from a meeting of European foreign ministers in Brussels said.

It added that "All terrorist groups in Gaza must disarm," a comment welcomed by Israel.